I’ve been back from Nicaragua for nearly four months now, but my time there is still sitting heavily with me. How do you appropriately describe an experience that was so intimate and familiar and yet simultaneously so very foreign? In what may (or may not) be my final post on my time in Nicaragua, I’ll attempt to wrap things up:

I didn’t feel it was fair to compare all of the places I stayed in Nicaragua when the price brackets were so very different. While I had a few nights of luxury while my family visited over Thanksgiving, most of the travel I did in the country was done on a very, very small budget.

And my favorite budget spot? Surfing Turtle Lodge on Isla Los Brasiles. It was a bit of a journey to get to from Granada (two buses, a taxi, a boat, and a long walk), but at US$10 a night – the price was right, the mood was calm, and the views were lovely. To read more about my experience at Surfing Turtle, click here. 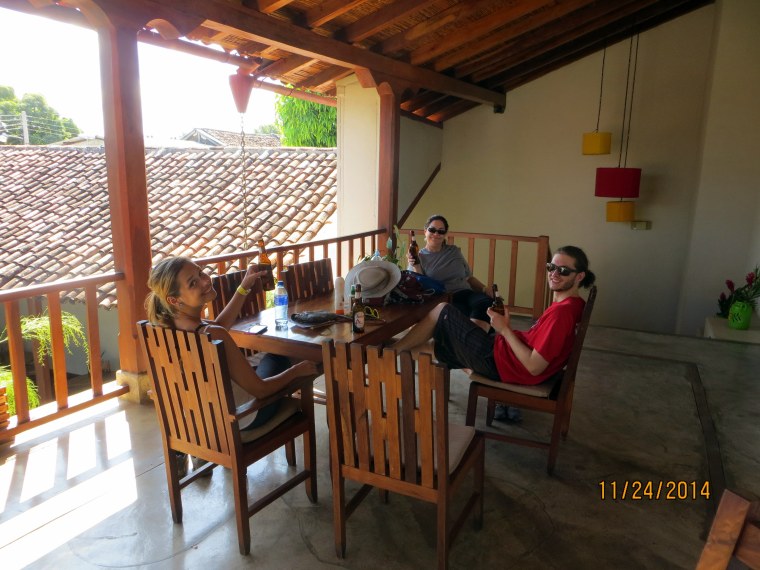 It is easy to travel on a budget in Nicaragua, but if you want air conditioning and heated water, you’ll have to shell out a bit more. I visited Hotel con Corazon several times during my stay in Granada for its bar and free salsa lessons. And when my parents arrived in the city, I knew where I wanted them to stay.

Not only are the grounds of Hotel con Corazon beautiful and the rooms comfortable, this mid-range hotel (a double room starts at US$79/69 a night in the high/low season, breakfast and taxes included) supports a number of great local causes (including La Esperanza Granada, the nonprofit I volunteered with). To learn more about Hotel con Corazon, visit their website here. This brand is planning to expand to Mexico, Cambodia, and Suriname over the next few years, so keep an eye out for them as you plan your own travels! I know I certainly will.

Visiting Morgan’s Rock and their private beach was on another level to any other experience I had while in Nicaragua. The open-air cabins were amazingly luxurious and the views were unparalleled. This was probably the only place in Nicaragua where I experienced truly good service… and while it all came at a price, it was so, so worth it. You can read my full review of Morgan’s Rock Hacienda & Ecolodge here.

Honestly, Nicaragua was the first place I’ve ever visited where I didn’t connect with the food. I grew up on Latin cuisine, so I 100% expected to fall in love with my meals in this country. Overall though, I found Nicaraguan food to be fairly… bland. There were a lot of fried things, not many fresh veggies, and not a lot of flavor.

That being said, Granada is a modern city with tons of great, international food options. I had plenty of memorable meals there, but my favorite meal took place many hundreds of miles away from any city.

You see, it was lobster season when I visited the Corn Islands. Need I say more? 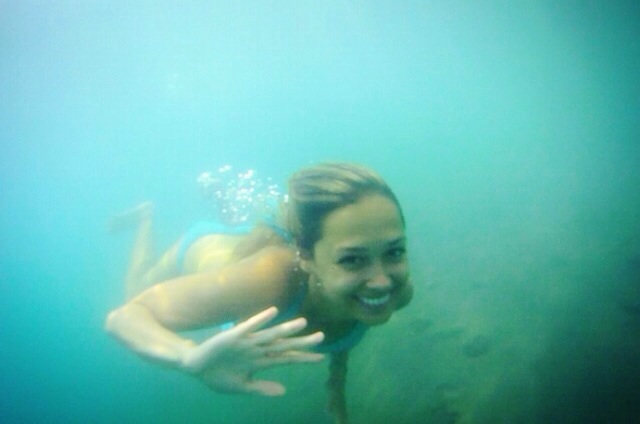 An easy day trip from Granada, I loved Laguna de Apoyo so much that I went three times. This magnificent crater lake is so calm and refreshing, and is, in my opinion, the most lovely of ways to cool off from that ever constant Nicaraguan heat. A trip to this area of the country would not be complete without a dip in these soothing waters.

My first impression of Little Corn Island was pretty disappointing. A massive storm had just rolled through, leaving debris scattered everywhere and large, churning waves. After all the travel it took to get there, I didn’t see what all the fuss was about. But as the weather turned pleasant again, it all became clear – the water, that is – crystal clear.

Anytime I read anything about Little Corn Island the writer always exclaims that you better go now before this place becomes the next big thing. I don’t know that the island has the infrastructure or the space to truly go commercial, but I’m sure it’s getting more and more crowded by the day. So I’ll have to echo the masses who’ve already been in my advice: go now!

I got up close and personal with plenty of volcanos this fall –  San Cristobal, Concepcion, Telica, Maderas, Masaya, Mombacho, and Momotombo were all spectacular up close and from afar. But nothing, nothing beats climbing Cerro Negro outside of Leon only to slide down on a volcano board. If there’s one thing you have to do in Nicaragua, this is it. 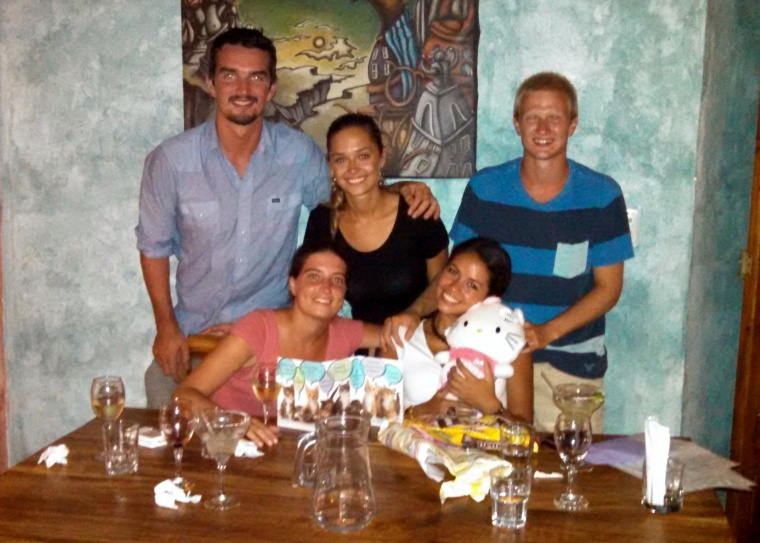 I expected I’d make friends on this journey, sure. What I didn’t expect was the high caliber of so many of the people I’d be working with. And I certainly never imagined I’d form connections strong enough to stand the test of time and distance. It was a pleasant surprise to be a part of a family in Granada, one that enriched my experience exponentially (thanks guys!).

Where do I even begin? Every day was a challenge in Nicaragua. Whether it was the tremendous heat, the Nicaraguan school system, the young travel culture, the machismo, or the various bites and injuries (did I mention I got hit by a taxi?) – life was rarely easy and often unpleasant. But I’m going to call my biggest challenge the six week cold that plagued nearly half my time in the country and formed into a nasty case of Bronchitis.

Walking in the heat to the pharmacy three times a day to use a shared nebulizer (fun times pictured above) was not a highlight of my stay. It was, however, an excellent way to practice my Spanish. There’s nothing like being pathetically sick and surrounded by doctors who don’t speak your language to get your medical lingo down fast!

Staying in one place for the majority of my time in Nicaragua not only brought my costs way down, it allowed me to really get to know the place and enriched my experience by allowing me to expand on my classroom teaching practices before starting my graduate program. While it’s a nice sentiment to want to volunteer abroad to help the less fortunate, I knew from day one that I was signing up to broaden no one’s perspectives but my own. That sounds harsh, but I truly believe that’s the best way to approach a situation like this. Results come slowly, so with expectations set low the connections I was able to make and the small changes I was able to observe while volunteering was just icing on the cake. You can read more about my experience with La Esperanza Granada by clicking here.

What I’d Do Differently 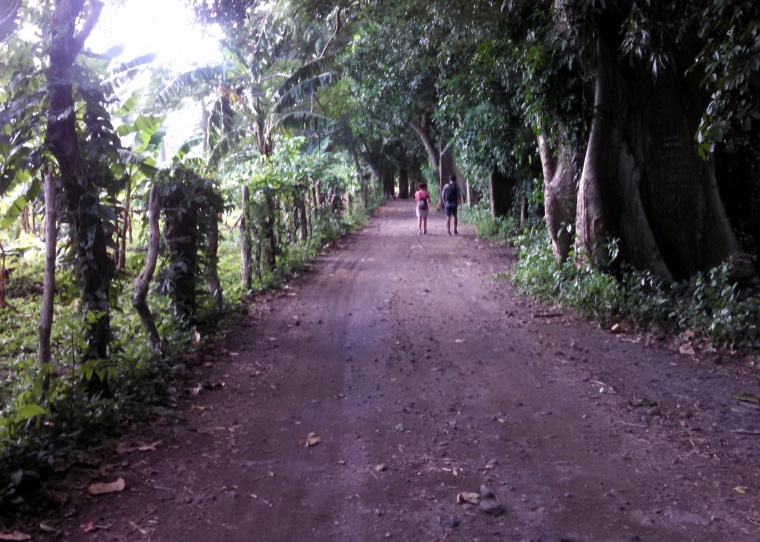 I would have loved more time to explore the country and the rest of Central America. But overall, if I had the opportunity to do it over again, I wouldn’t change much. While it would have been nice to take off and travel, the ten weeks I stayed in Granada were not nearly enough to accomplish what I might have liked to accomplish in the schools. I don’t regret the way I spent my time in Nicaragua, I just wish I could have had more.

On The Next Trip

There is still so much to see! But there are two spots in particular that were on my list that I won’t neglect the next time I find myself in this country:

I’ve heard this is a highlight for many Central American travelers. They say you can tube down this canyon, which is at times just barely wide enough for one person to squeeze through!

Coming to Nicaragua to travel and teach is one of the best things I’ve ever done for myself. And while I didn’t leave with perfect Spanish or even much clarity as far as how to mend a broken and impoverished school system, I did leave with a wider perspective on the world of education, insight into why families in Latin America choose to immigrate to the U.S., and a knowledge that no matter what challenges I’m facing in my future classroom, there are teachers out there with much bigger problems and far fewer resources. I saw new places, learned new things, and made new friends. Reflecting on the experience months later, I know this is something that will stay with me for a long time. And for that I’m enormously thankful.