The seaside ruins of Tulum were amazing, no doubt about it. But they merely wet my appetite for ruins and what was to come. Heading out of Tulum and towards the inland Yucatan city of Valladolid, I had one thing on my mind – Chichen Itza.

So on our second full day in this fair colonial city Austin and I hopped a bus to one of the new Seven Wonders of the World.

First, a few notes on getting to/from/into Chichen Itza that were not included in my guidebook and would have been very helpful to know: 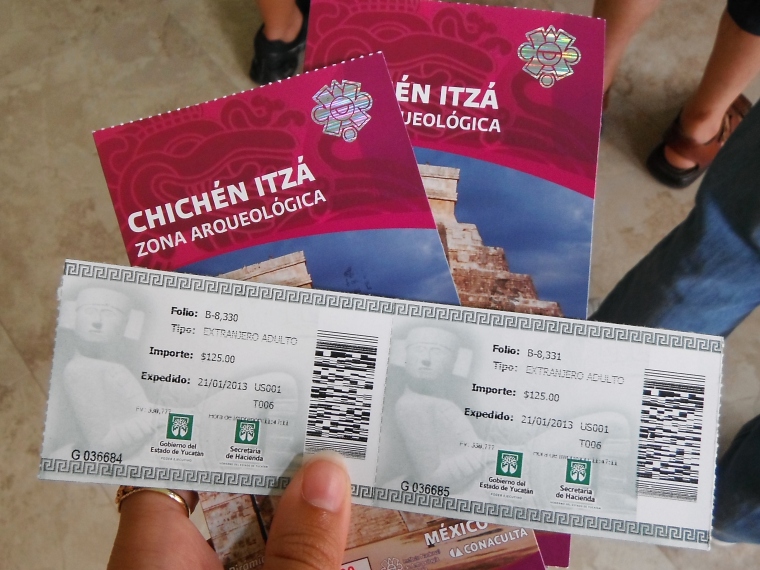 If you’re not coming to the site as a part of an organized tour (aka you need to buy your own tickets) know that you’ll actually need to purchase two sets of tickets at two separate windows. From what I understand one covers the state fees and the other federal. There is some small signage but nothing incredibly obvious and it would have saved us a little bit of time to know of this 2-ticket rule before standing in line to get into the site and finding out at the last minute. We had actually purchased the second ticket first, thinking the two lines were for the same thing, and then happily made our way to the front of the turnstiles before realizing our error. No bueno.

Second, a bit of advice on how to get to Chichen Itza should you be commuting from Valladolid as we were: only 30 minutes away, Valladolid is a great option to use as a base for a day trip to the famous ruins. If you’re wanting to get there on your own, you have three main options: First – you could hire a taxi. They are easy to find both in Valladolid and Chichen Itza, but expect to pay for that convenience. The more economical option would be to hop on a bus or collectivo (a collectivo is generally a van with a set route from one place to another that leaves for its destination once it is full, rather than on a set schedule). We opted for the bus thinking that would be more reliable. We bought a roundtrip ticket and headed on our merry way. Everything worked out great until it was time to return to town. We ended up waiting 2 hours for a bus headed in our direction to show up. In the meantime at least 3 collectivos came and went. They offered us their services as we sadly clutched our pre-purchased tickets and nodded our heads. I felt like such a sucker.

Lesson learned: ‘schedule’ does not equal ‘reliable.’ Do it the way the locals do and take the collectivo.

Back to the fun stuff.

Much like Tulum, Chichen Itza was at times horrifyingly crowded. This was especially true at the entrance. But once inside, Chichen Itza is so massive that the crowd actually disperses fairly quickly. In general though, I don’t mind people in sites like this. This place was once a huge settlement, so to see hundreds of people milling around almost seems natural. What did bother me though, were the vendors.

They were everywhere – from the second you get off the bus to the most remote corners of the site. There are tables set up with hawkers yelling prices and blowing into whistles and these kazoo-like convections that I believe are supposed to mimic a jaguars’ roar (I make it a rule to never give my business to someone who is attempting to roar at me). “Can you imagine giving a Cliff Palace tour,” Austin asked, “while competing with these guys.” 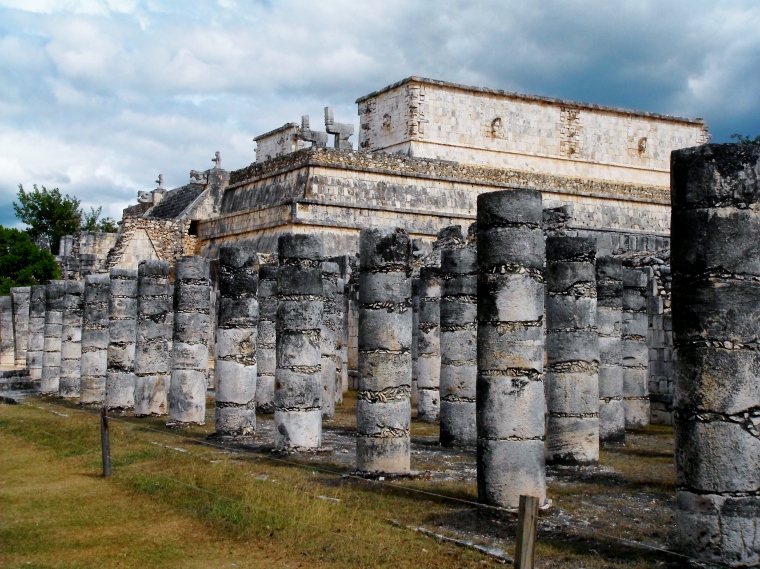 The incredible thing about Chichen Itza though, is that it transcends the crowds and the vendors. It’s so massive, so grandiose, that someone could have come right up to me blowing one of those stupid kazoos in my face and I might not notice at all. It wasn’t just the big stuff that kept me entranced – it was the little things too. The details in this giant place may actually be more striking than the famous pyramid itself. If you look closely you’ll find warriors, snakes, eagles, and jaguars – feasting on human hearts no less – carved into the rocks that line this jungled landscape. 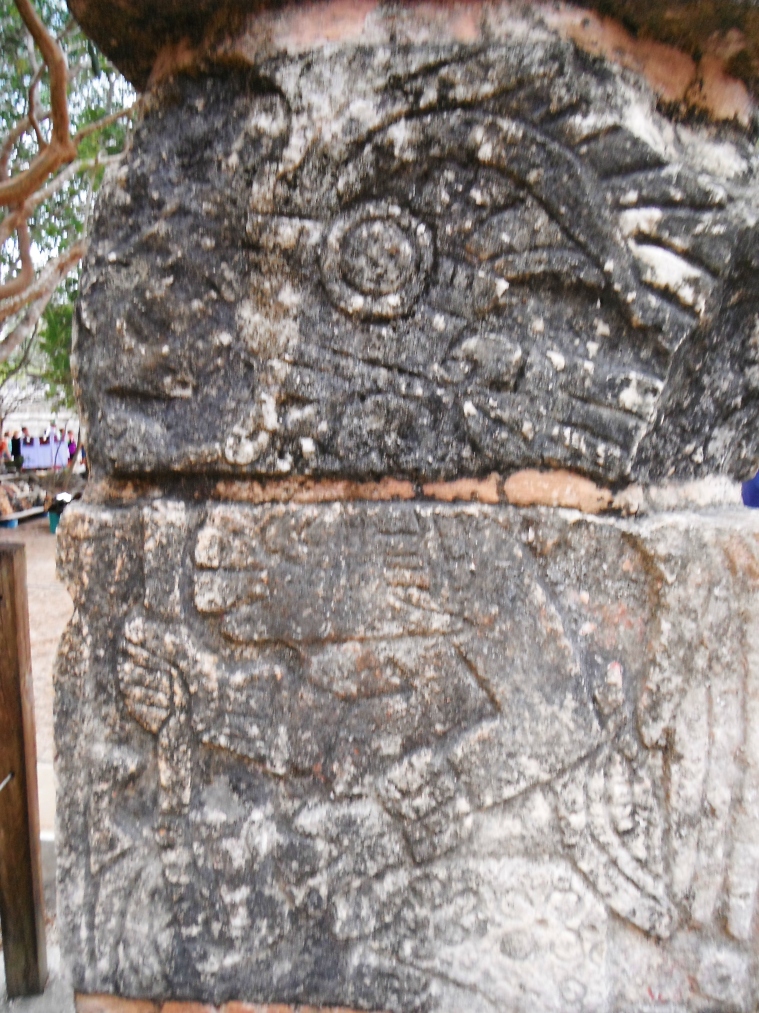 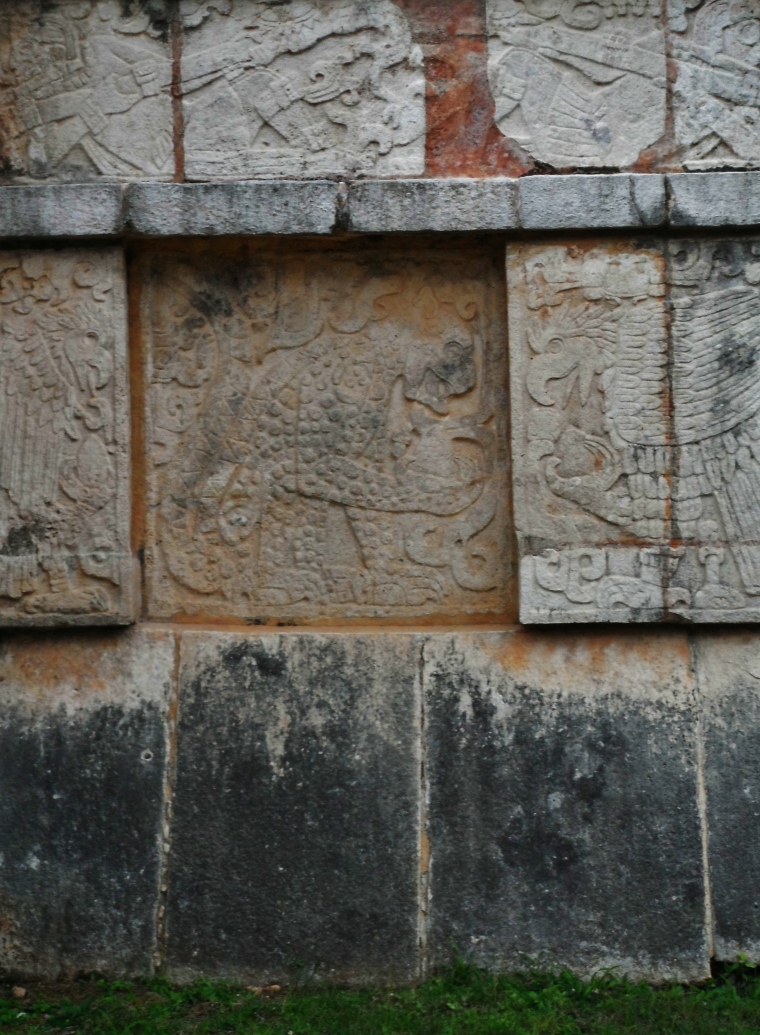 It’s absolutely awe-inspiring. And the fact that these people were the contemporaries of my beloved Ancestral Puebloans of Mesa Verde – operating under very similar limitations as far as tools and resources go – well, that’s just icing on the cake as far as I’m concerned.

Yes, Chichen Itza was stunning, inspiring, mind-boggling… and worth every penny, every inch of packed crowd, and every goddamn kazoo.