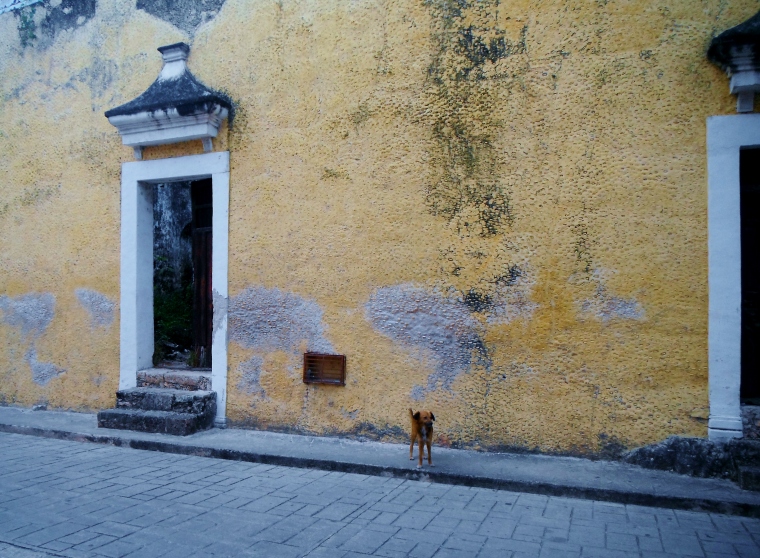 Before arriving in Tulum and seeking out starting points for a day-trip to Chichen Itza, I had never heard of Valladolid. Austin had always planned to go there, of course, but I merely saw it as a stop on my way to one of the new Seven Wonders of the World. Little did I know the charm, delight, and teeny bit of struggle that awaited me in this beautiful inland town.

Our guidebook listed only 3 places to stay in Valladolid, which led us to believe that lodgings would be limited. This ultimately steered us to agree once again to an expensive hotel room after only a little bit of looking. Luckily, Hotel Tunich-Beh turned out to be a gem of a boutique hotel located in a beautiful old mansion in the historic town. Should you ever be wondering through Valladolid on a moderate budget, I would absolutely encourage a stay here. At M$700 a night (roughly US$56) it’s actually a really good deal as the rooms are immaculate, the ambiance incredible, and the breakfast included! 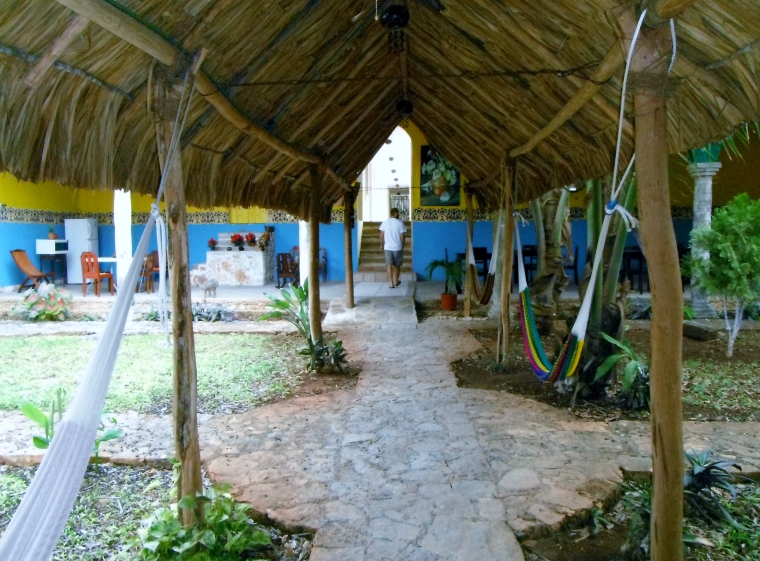 After an evening wandering the pastel-colored streets, A and I retired early. We had big plans for our first full day in Valladolid. There are a number of cenotes within a reasonable distance of the town, and we were planning on finding at least one. 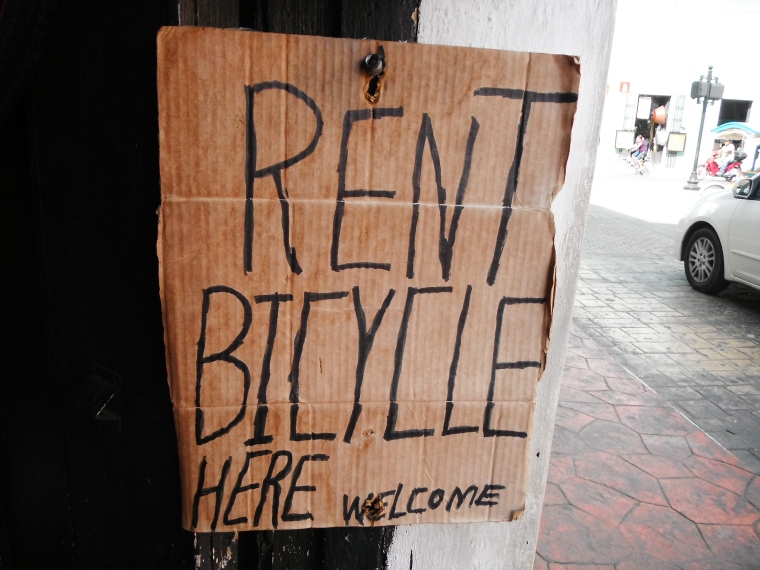 A cenote is a limestone sinkhole, often underground, that has filled with water from the enormous network of underground rivers that flow beneath the Yucatán. Interestingly, some scientists have theorized that the large number of cenotes in this region is connected to the Chicxulub meteor that struck here over 65 million years ago (you know, the one that may or may not have led to the extension of the dinosaurs). No matter the exact cause, the result is pretty dramatic – so much so that the Maya in this area considered these to be sacred waters.

It was this incentive that got me to willingly and excitedly hop on an old, worn out bicycle.

This is where the struggle comes in. 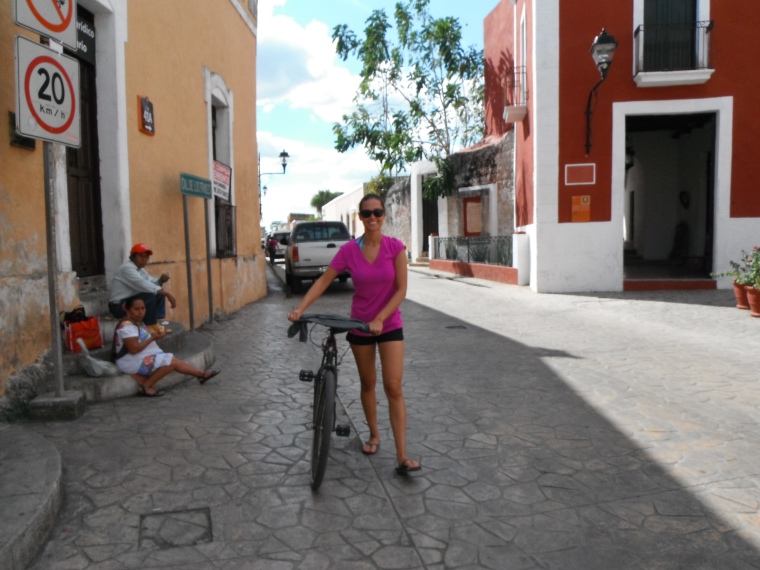 I can remember riding a bike quite happily as a child, but it had been some time since I had hopped on an actual two-wheeled contraption. And by some time, I mean this fall, when I rode a borrowed bike around a 7-mile loop at Mesa Verde for the ‘Hike & Bike’ event we hold every September. I made it, but was thankful I ran the first shift so that few visitors saw me huffing and puffing. When jumping on the bike for the first time I immediately ran into a sunflower bush. It turns out that in my adult life I am simply not a very good biker.

I can’t honestly say I had forgotten this experience, as I wheeled the bike out of the shop and on to the now deceptively dangerous streets of Valladolid. But I was optimistic. The road at Mesa Verde had some fairly steep sections, and at least during that experience I had re-learned all about stopping and starting. The phrase ‘like riding a bike’ couldn’t possibly come from nowhere, after all… could it?

I veered wobbly from side to side as I attempted to make the bike go for the first time, but quickly decided to abandon the endeavor until we got to a quieter road. My mother taught me better then to attempt to re-learn how to ride a bike in the middle of Sunday traffic (and without a helmet to boot, sorry Mom!). 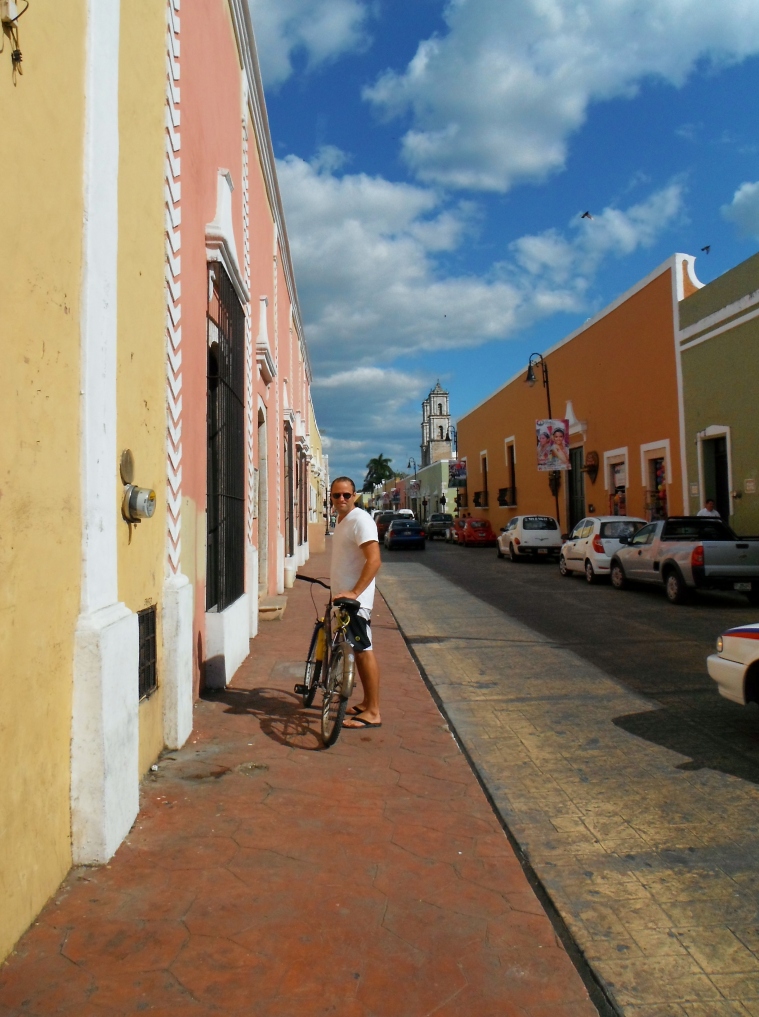 Austin was patient and agreed to walk the bikes with me until the edge of town, no matter how embarrassing it may have been for him. And then it was time to suck it up and get moving. After a slow start I began to get comfortable, but the farther away we got from the center of town, the worse the road got. Big bumps and potholes laid out in front of me like the most evil obstacle course I’d ever seen, and it really felt like the harder I tried to avoid something the more likely I was to hit it. I kept my spirits up by repeating to myself (usually out loud, sometimes in song) how I had been promised a bike path sooner or later.

Finally we reached the promised path, but although it did provide the luxury of not having to worry about sharing the road with motorized vehicles, the condition of the pavement itself actually got worse. Added to that was a series up & downs that never seemed to actually lead to any sort of  gain  or loss in elevation. It was as if they were placed there only to remind my thighs how under-worked they really are. They screamed at me in response. We’ll do squats every day from here on out – they seemed to cry – as long as you promise to stop this madness! My strained hands and butt agreed. Remind me, single reader, if I ever do decide to invest in a bicycle, to get one with a super cushy seat and handles that ride high so I don’t have to lean down with all my weight on them. My palms are still sore as I write this post two whole days later. 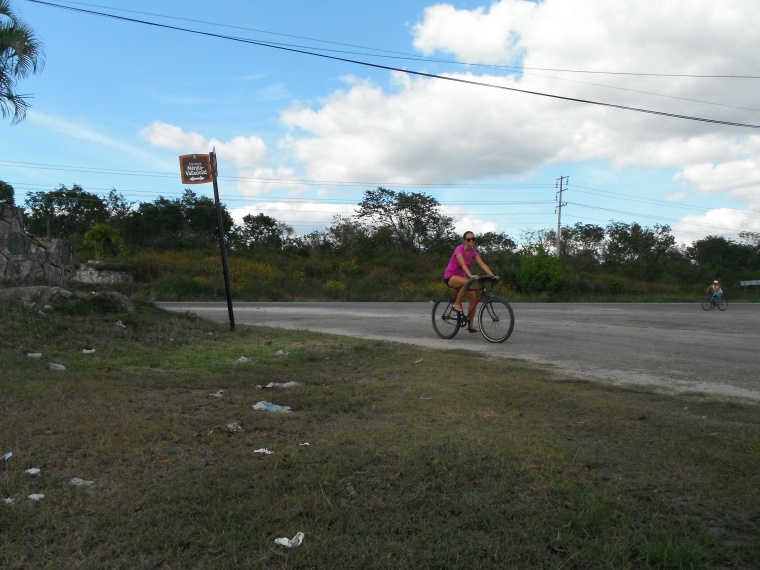 After peddling for an hour in the heat, we finally arrived at our destination. A whiz through the ticket line and down we went, into what I hoped would be the cool, calm, happy heaven worth all that hell. 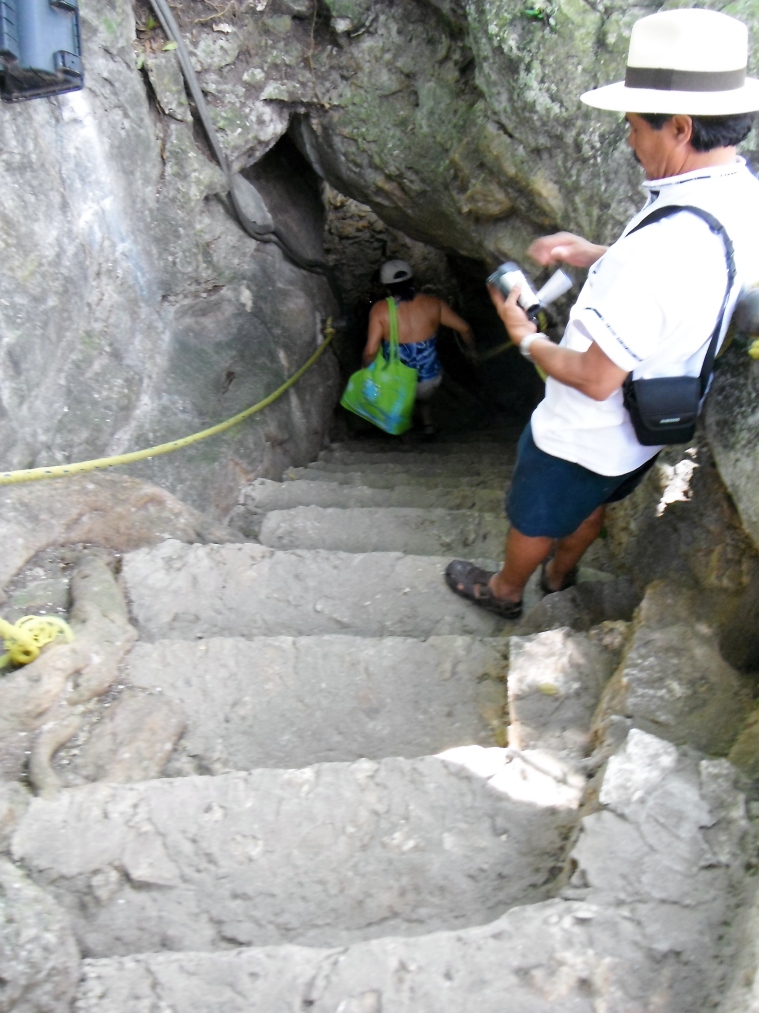 And really, that’s what it was. The air grew thicker as we made our way down the steep steps into the cave. Only a small opening in the ceiling allowed the sun into the cavern. The rest was lit with an array of artificial lighting that somewhat dramatically changed from color to color every ten minutes or so. The result was pretty but unnecessary. The place didn’t need any extra colors to illuminate its beauty. 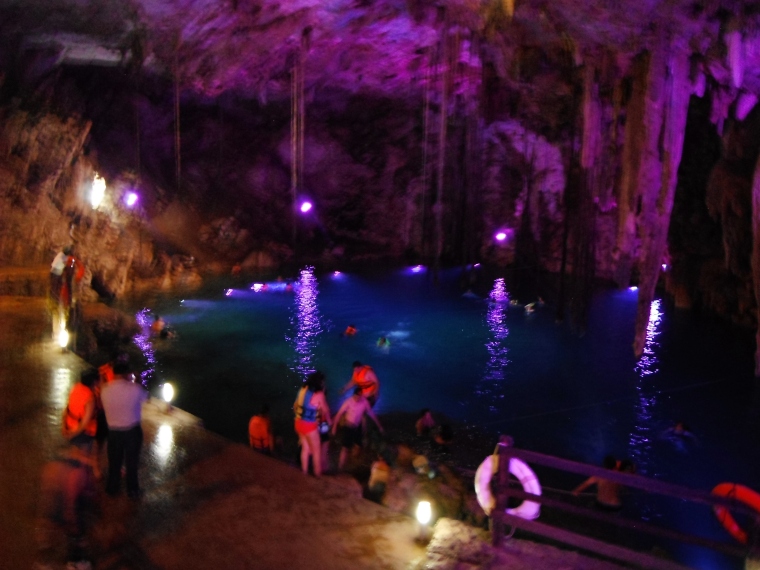 Although there were people there, I was surprised how generally hushed they were. It wasn’t very long before Austin and I were swimming the sweat away in that clean, underground place. 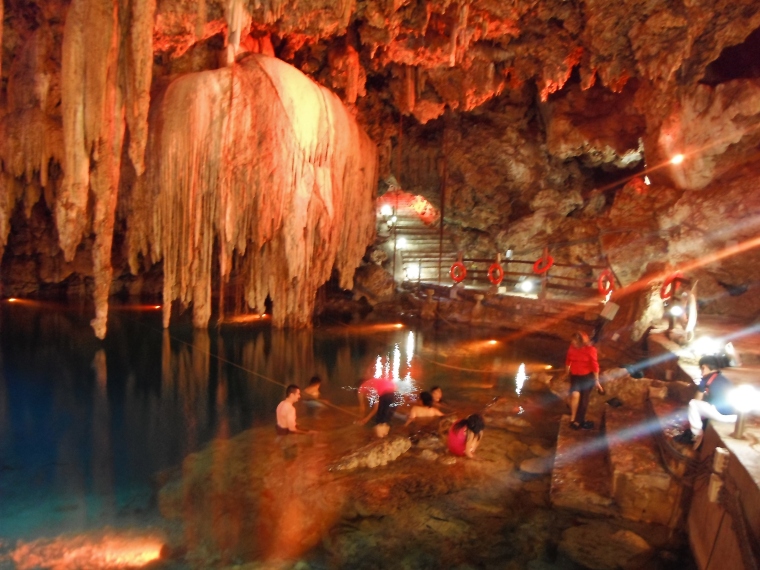 Too soon it was time to head back to reality, back to those rickety old bikes, back to Valladolid. But not before I made Austin buy me a cold coconut for nourishment. 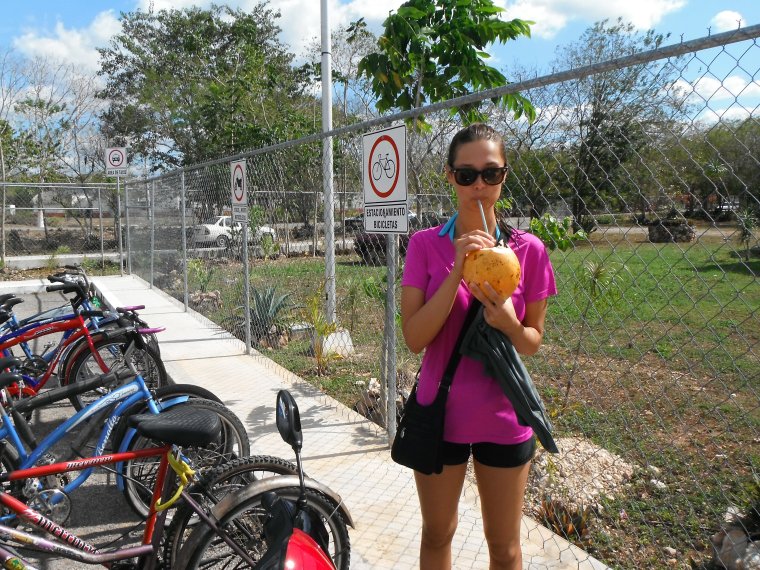 Back in town we showered at our hostel (Hotel Tunich-Beh you are beautiful, but you just can’t compete with the offer of M$280 a night in the eyes of this budget traveler) and set out to find a hearty meal to reward ourselves for the day’s struggle. Surprise #1: realizing that all that pain was totally worth it. 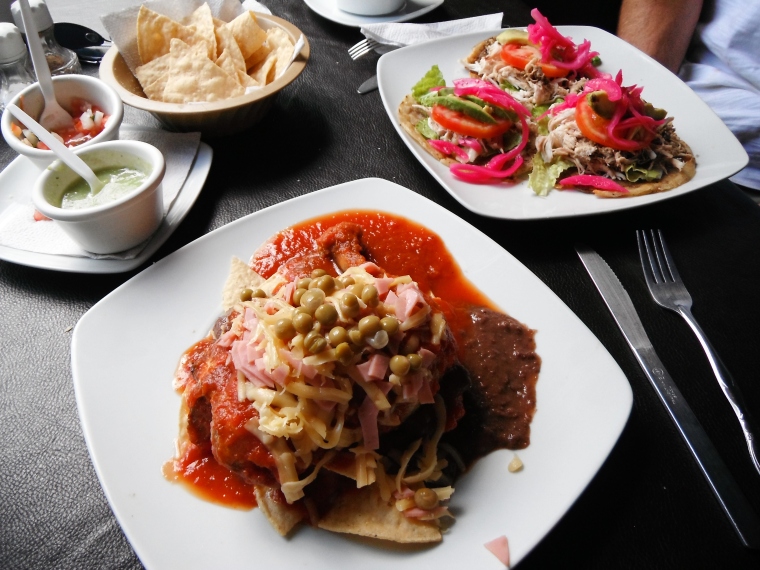 After exploring the ruins of Chichen Itza (more on that to come!) we headed to the main square on our third and last night in Valladolid just after sunset to enjoy the ambience and some ice cream. As we approached the songs of twilight began to overtake us. But there were no speakers or mariachis here. Instead, hundreds of birds were roosting in the trees above the square, singing us lullabies of the jungle rather than the city where we seemed to be. What a delightful surprise #2. 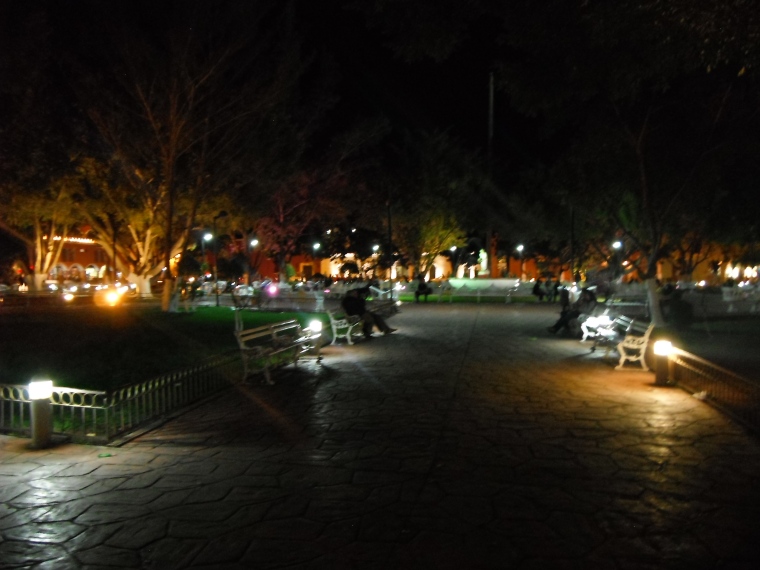 Surprise #3: For a place I didn’t know existed just a few days ago, Valladolid has left me reeling with its colors, waters, and beautiful evening sounds. One week into my great Mexican adventure, and I can only hope for more surprises like these. 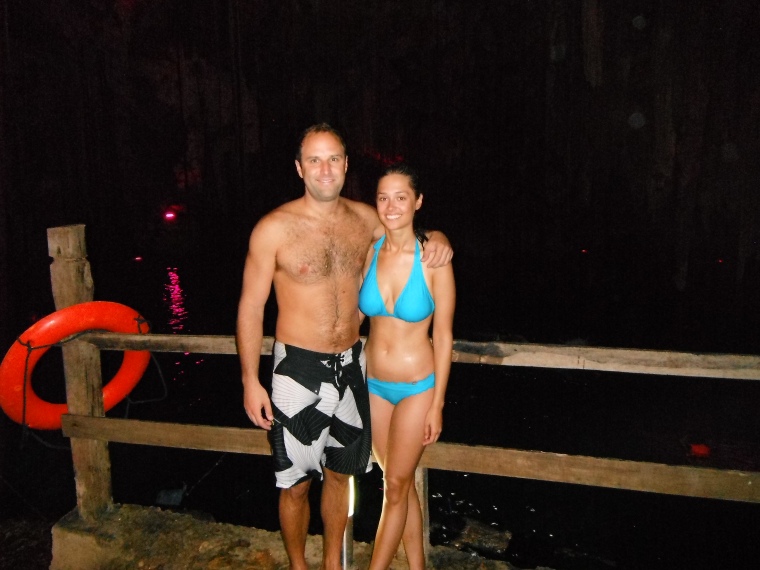 Tell me single reader, what place has surprised you lately – for better or for worse?

8 thoughts on “Surprises and Cenotes in Valladolid (or, How I Remembered that I’m Not a Good Biker)”