In my past life (namely college) I worked several internships at public relations firms that put me in touch with a number of high end clients and in charge of a number of high profile events. It was exciting but utterly exhausting, and when I made the decision to stay at Canyonlands and not return to a job in the big city back in 2010, I thought I had left that world behind. I’ll admit that every now and then I’ve toyed with the idea of returning to that fast-paced scene, but never in a million years did I suspect I might collide with it in the context of the wonderfully slow-paced life I’ve been living for the past month here in the Dominican Republic. 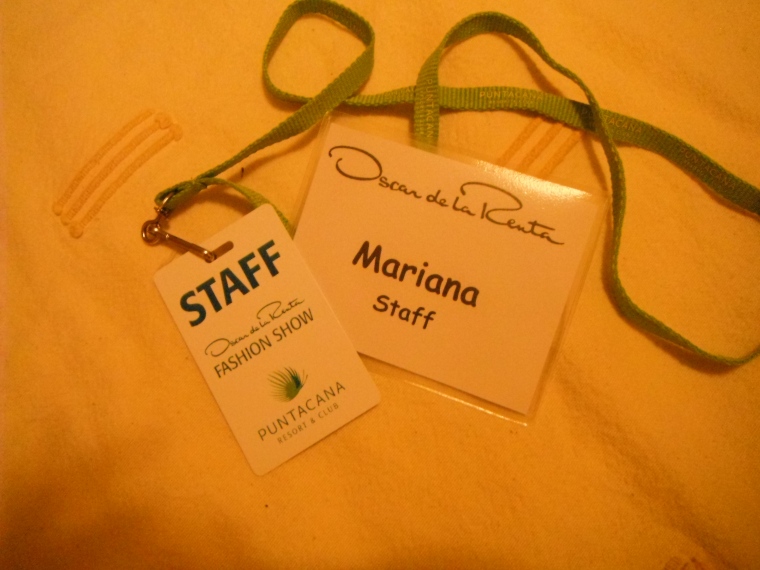 Here’s how it happened: Oscar de la Renta happens to be a distant relative of mine with whom I’ve never had a close relationship. My Aunt manages one of his boutique stores at Tortuga Bay, inside the Punta Cana Resort & Club. This boutique is relatively new and months ago my Aunt had the idea to host a small party to thank their main clients. The guest list was not supposed to reach 80. Somehow the Punta Cana Foundation became the beneficiary of this party, with the proceeds set to go to them, and from there things started snowballing. The guest list went from 80 to 800 and the party turned into a full-scale fashion show featuring international models and a production team flown in from New York. Oscar himself was set to make an appearance as well as Vogue editor Anna Wintour and the crème de la crème of Dominican Society.

So what about the boutique? The plan was to set up a mini boutique backstage after the show in order to publicize the new shop and hopefully kick-start sales for the new year. But with a fast growing guest-list, my aunt and her team of 2 were starting to feel a bit overwhelmed. Oh, and did I mention this ‘mini boutique’ would have less than 10 minutes to set up in the same space the models would be changing backstage? 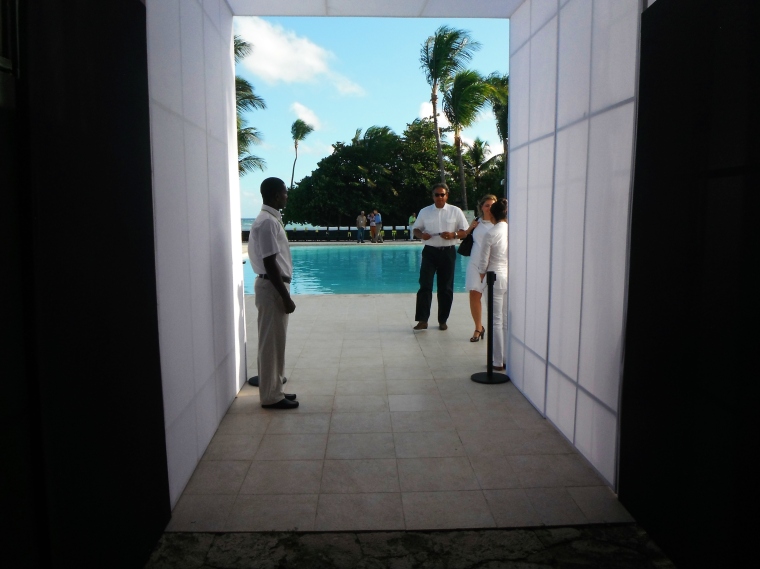 Enter my mom and I. We were recruited a few days before the show to assist with sales and set up /take down. We spent a morning at the store memorizing prices of jewelry and apparel and thought we were good to go. But as the event ballooned so did my Aunt’s need for staff. Soon 4 of my cousins, several family friends, Austin, and his mom were all added to the list. The morning of the show we learned we would be selling some of the gowns from the collection too and, oh yeah, the team from NYC didn’t have enough people to dress the models, could we help out there as well?

In short, it was utter and complete chaos.

The most nerve-wracking part for me was dressing the models. I was so terrified that in the process of a quick change I would break some priceless zipper that I begged to be excluded from this particular duty. But they were so low on people that even my 12-year-old cousin was assigned a model to dress. So without any practice and just a few minutes to familiarize myself with my assigned outfits, we took our places.

Each model had three ‘looks,’ organized on the rack in order from first to last with pictures pinned nearby of what accessories went where. My first two looks went off without a hitch but the last dress was set up to be a bit of a problem. My model was supposed to wear a beautiful pink sequenced gown that required a petticoat underneath. The problem was that there were not enough petticoats for all the gowns that needed them, so some models had to share. Without any rehearsal I had no way to know that the girl with whom my model was sharing would not make it backstage with the petticoat until, read it: 3 minutes before my model had to go on. To make things worse, the petticoat didn’t fit either model, so both had to be pinned into place. 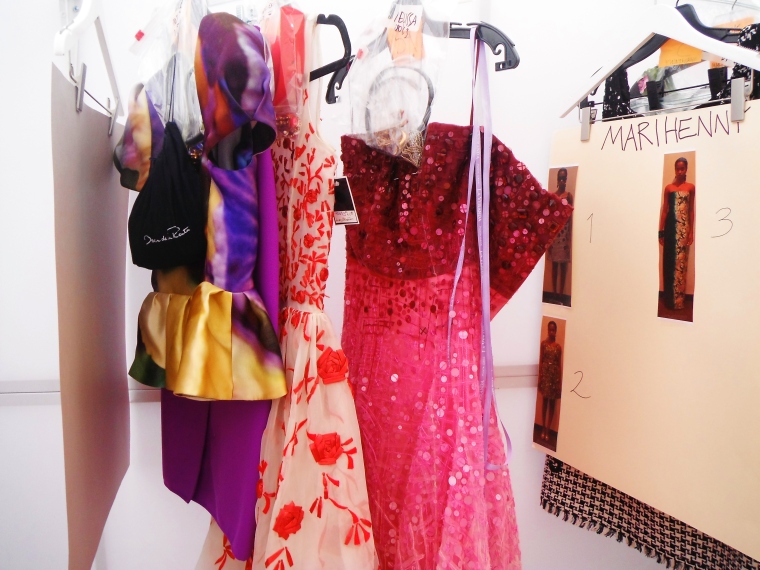 My model and I paced back and forth as we waited for the blonde in the flowing blue dress to make it backstage. As soon as she turned the corner the poor girl was surrounded by a crowd of black and white whipping her skirt over her shoulders and yanking that damned petticoat out from under her dress. I’d be shocked if she didn’t get scrapped up by a number of flying safety pins in the process.

Then the same black and white blur surrounded my horrified looking model as they stuck their heads under her dress and between her legs to pin the petticoat into place. As fast as they arrived they were gone and she was on the runway.

I let go my held breathe and thanked god that I wasn’t a foot taller and 6 inches thinner.

The team only had a minute to spare before it was time to start setting up the boutique. Entire dressing stations were frantically pulled apart to be reset as showing tables as boxes and boxes of apparel were lugged in. The dresses from the show were re-ordered so that guests could browse and I was handed the holy book of prices – the only one we had.

Before we knew it the curtains of the tent were opened and the backstage boutique became crowded. Somehow, we never anticipated so many people would show up and the expectation was always that the jewelry would be the main attraction. But all anyone wanted was the dresses, and I held the only source of their prices. So any time anyone wanted to know what a dress cost, the sales associate would have to come find me. To make things worse, we weren’t selling all the dresses in the collection, although they were all on display, and since most of us were as new to the apparel as the customers browsing, we had no idea what was for sale and what wasn’t. On top of everything, we only had the sample sizes available for immediate sale, and before we could place an order, we had to call New York to make sure the size requested was available.

Oh, and did I mention the credit card machine wasn’t working?

In the end we made it out with a profit, no missing items, and a surprising number of happy clientele. It was chaotic and stressful and something I’ll never forget, but also something I’ll probably never do again.