Still high off of our wildlife viewing day on the water, Tom and I awoke early on day 5 of our honeymoon. We had read that Pearl Harbor limits the amount of visitors in a day, and had heard horror stories of tickets sold out before 10am. And so we set out not long after dawn for what we knew would be an emotional but important morning.

Probably the one big shock of our Hawaii trip was how horrendous the traffic around Honolulu is. In our efforts to get to Pearl Harbor early we found ourselves stuck in the bumper-to-bumper nightmare that is the morning rush hour. That combined with my poor navigating skills meant it took us nearly an hour and a half to travel the 17 miles from our resort to the harbor. Still, arriving around 9am there were no lines and seemingly plenty of tickets available for the USS Arizona Memorial on a mid-week day in January.

Fun fact: A lot of resorts and tour operators on Oahu offer excursions to Pearl Harbor, and we saw several buses full of tourists pull up while we were there. These tours often range from $45-$75, but what you really are paying for is the transfer. Access to the USS Arizona Memorial is ticketed, but as it is considered an active American military cemetery, free. You also have access to an impressive museum and beautiful grounds without paying a dime. As I remember there were optional activities that did cost money (audio tours, entry onto a few ships docked in the harbor), but we found the free amenities plentiful, informative, and interesting. Renting a car allowed us to access all of this without paying a tour operator to ferry us there. 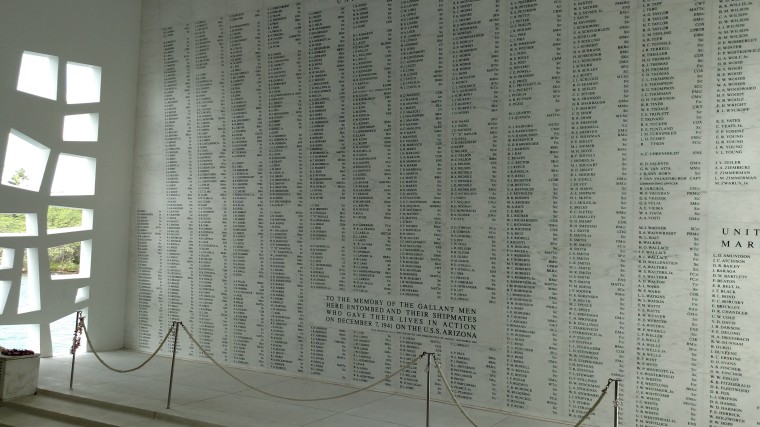 We had an hour to kill before our ticket time for the USS Arizona Memorial, and we filled it easily by walking through the visitor center and museum. I loved the design of the museum. It had two entrances. On one side of the museum was the American story, on the other side the Japanese – so depending on which entrance you went in you would get one perspective of the lead up to the attack, then at the center of the exhibit was the story of the day itself, then the third part of the museum would present the lead up from the other perspective. It was fascinating and thorough and the hour until tour time wasn’t actually enough to get through the whole thing. We made sure to circle back around after our USS Arizona visit to get the complete story.

Before taking the boat to the USS Arizona, you are brought into a room and made to watch a movie about the history and significance of the place. I thought that was a great way to make sure all visitors to the memorial were reverent and respectful. It’s hard to be flippant after that. A short boat ride brings you to the white structure that has been erected on top of the sunken ship. The memorial does an excellent job of paying homage to the sacrifice in a tasteful, beautiful way. At the same time, it doesn’t glaze over the horror of the way these men died. The ship is clearly visible below you as you walk through the memorial. It’s confronting and solemn, and absolutely worth this visit.

It’s important to go see these places when you can. It’s important to be reminded of the horrors of humanity if we have any hope to keep them from happening again. And in addition to the responsibility of it all, Pearl Harbor is a beautiful place. I’m glad we visited. But I was emotionally drained when we returned to our car. 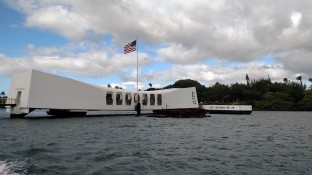 It was lunchtime, and with less than 2 days left on Oahu, Tom and I had yet to try a Hawaiian staple cuisine: poke. Poke is a raw fish salad that is popularly served as a part of a poke bowl – which essentially means with rice and perhaps a few other odds and ends. The sauce on the poke is usually soy based and the dish is most commonly made with Ahi Tuna. There are lots of places to try this delicacy in the Honolulu area, and a quick search on our cell phone pointed us in the direction of a spot nearby. Poke on Da Run is a hole-in-the-wall sort of spot in Pearl City that serves up huge portions in styrofoam containers. We each got half-and-half servings of their traditional and spicy poke, and then headed back to our room at Aulani to enjoy it with a beer on our ocean-view balcony.

There isn’t really much else to say except OH MY GOD. Poke is my new favorite food. If you’re ever in Honolulu you have to try it and while I’m no expert, it’s hard to imagine a batch as tasty as what we got from Poke on Da Run. It was the perfect spirit-lifter after the solemn morning.

Rounding off our day of Honolulu must-dos, Tom and I decided to splurge for the ultimate Hawaiian tourist experience: the traditional luau. There are many to choose from in the Honolulu area, but knowing production value is not something Disney tends to skimp on, we chose to go to the one put on by Aulani. We went full out and paid an additional $40 for VIP tickets, which included early access to the luau, seats closer to the stage, and – most crucially – all you can drink beer, wine, and cocktails. We were both given shell leis upon entry, and the first hour of the luau was a showcase of different traditional Hawaiian arts and crafts. There were stations on taro pounding, kakau tattoos, and flower arranging with live music to enjoy as well.

It should be noted that this was a luau at a Disney resort, so there were lots of families with young children there. If you’re easily annoyed by kids, this may not be the luau for you. Overall though it was a diverse crowd with people of all ages, and while there were definitely some child-focused activities, there was plenty to keep kid-free adults busy as well.

The food was plentiful and delicious – a great way to try lots of different Hawaiian dishes at one time. But it was the show that was really something special. The presentation of different Hawaiian dances was interwoven with the history of the area and culture and a beautiful narrative that really draws you in. At different points in the presentation I found myself in total awe, in fits of laughter, and even in tears. It was absolutely beautiful.

In a lot of ways this was our box-ticker day. We were at the end of our trip and did most of our planning based on the ‘must-dos’ every other tourist/website/guidebook suggests. Sometimes in travel I feel like there’s this pressure to find these undiscovered things – but the tourist draws are there for a reason too. This is probably the millionth blog post on the internet about a trip to Pearl Harbor, a taste of poke, and a luau experience. As typical as it all was, it was still all new and special to me, and I’m happy to have checked those boxes. This was a day where we really experienced the gamut of our emotions – interest and sorrow and hope and discovery and joy and fullness and a little bit drunk. Maybe it’s an arc felt by millions before, but so what? This day, and those emotions, were all mine.