Even though the drive from Queenstown to Fox Glacier was only half of what we did to and from Milford Sound, the winding roads of the west coast made it feel much longer. Most of the west coast of New Zealand is made up of temperate rain forest, and there were times when I looked out the window on that drive and blinked hard to make sure that I was, in fact, in New Zealand and not Hawaii.

After a winding but beautiful five hour drive, we arrived in the town of Fox Glacier to our first foul weather views since Lake Tekapo. Despite predictions of rain all day every day, Queenstown and Milford Sound had blessed us with the clearest, bluest skies. Maybe it was this good luck that gave us confidence when the rain began to fall in Fox, and we decided to head out to the glacier anyways.

The Fox and Franz Josef glaciers, both located on the west coast of New Zealand, are some of the only glaciers in the world that terminate in a rainforest and are the only glaciers at their latitude to come so close to the ocean. We only had time to visit one, and to be honest the decision was made after a short back and forth conversation where we both voiced our indecisiveness on the issue. In the end, Tom made the executive call to visit Fox over Franz Josef for reasons I’m not privy to but suspect had something to do with which accommodations were cheaper (care to explain yourself in the comments Tom?).

Regardless of how we came to the decision to visit Fox, I am very happy to have seen it. Despite low hanging clouds and a slight drizzle, the glacier and accompanying walk was spectacular – and made for an easy sight-seeing day after our jam-packed explorations in Queenstown and Milford. Our luck held out as the sky refrained from opening up for the most part during our walk, and the overcast day actually turned out to be a bit of a blessing on the final, fairly steep ascent to the glacier overlook.

The next morning we were reacquainted with the clear blue skies we had grown accustomed to, and were treated to a spectacular view of the Southern Alps from which the Fox Glacier is born.

But once again we lacked the time to linger, though one of the best things about Fox Glacier is that it didn’t require much time. The walk to the viewpoint from the parking lot took less than an hour, which is likely why Fox is hailed as one of the most accessible glaciers on the planet. The catch is this – Fox Glacier is receding, and fast. Before and after photos from just two years ago are pretty shocking. So get out and see it while you still can! 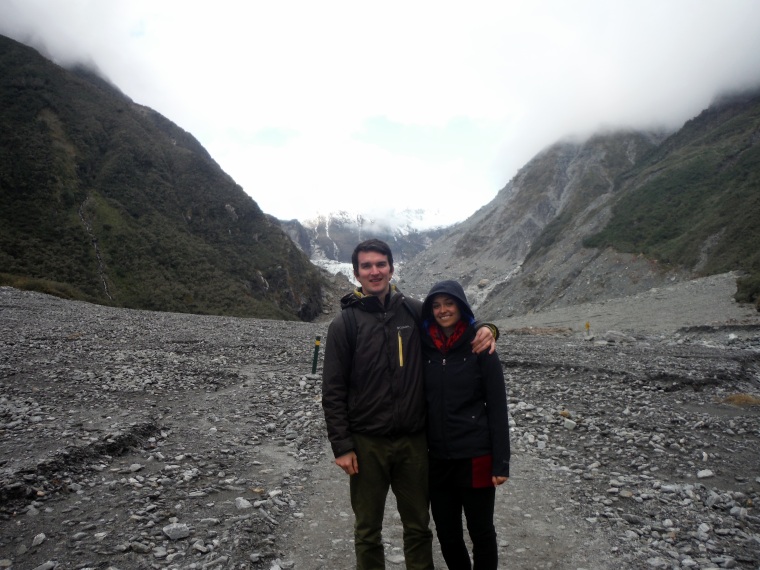