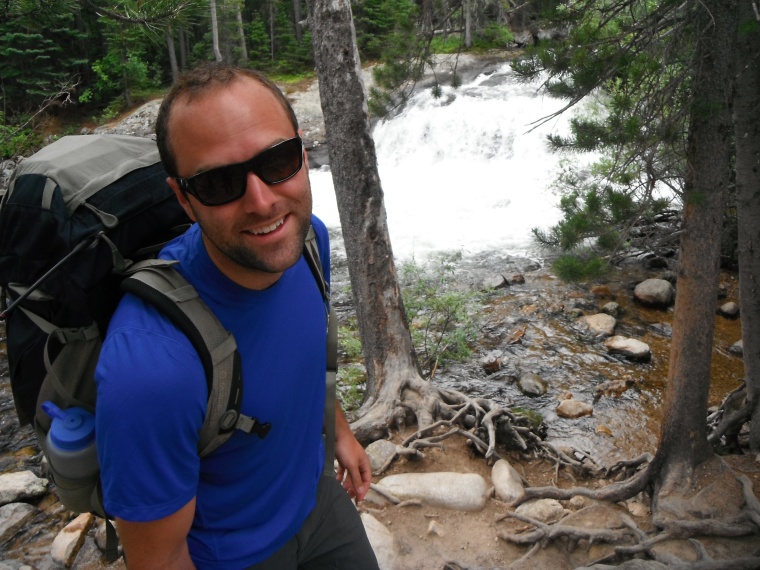 If you have been following this blog over the past few months, you might remember that my boyfriend Austin made a move from a job at the Island in the Sky District of Canyonlands National Park (just three easy hours from my position at Mesa Verde) to the front range of Colorado to work at Rocky Mountain National Park (now, eight hours away). The struggle of the park service couple is well known in the circles with which I run. Jobs are few and getting fewer and finding a place for two within the same park can be difficult. But we’ve been making it work, and a few weeks ago I finally made my way across the mountains to meet Austin in his park to celebrate our 3 year anniversary.

This was a big trip for me, since I work a 5-8 (five eight hour days) duty schedule which means my weekends are generally not long enough to make the sixteen hour round-trip drive. Luckily for us, Austin works a 4-10 (four ten hour days) duty schedule which means he’s a little more flexible and has been able to come to Mesa Verde one or two times a month since we’ve started working. My travel situation is made more complicated by the fact that due to short-staffing our supervisors have informed us we are only allowed to take two days of annual leave this season, regardless of how much we accrue. So this July I took all of my available leave so that I could have a four day weekend to fly from Durango to Denver and meet Austin on the eastern slope. It was the only time I’d be able to get there all summer.

Austin pulled out all of the stops. There are a series of cabins sprinkled inside the backcountry of Rocky Mountain National Park reserved for rangers on patrol. One of the perks of our park service connections is that if the cabin is not being used on any given night for patrol, it may be reserved by employees under the condition that they make themselves available in case of an emergency. Austin had reserved a cabin for us in the southeast section of the park, at a place called Thunder Lake. One of my supervisors who had worked at Rocky Mountain for many years had recommended it to me as the most beautiful cabin in the park. When I got the call that A had been able to reserve it, I was thrilled. 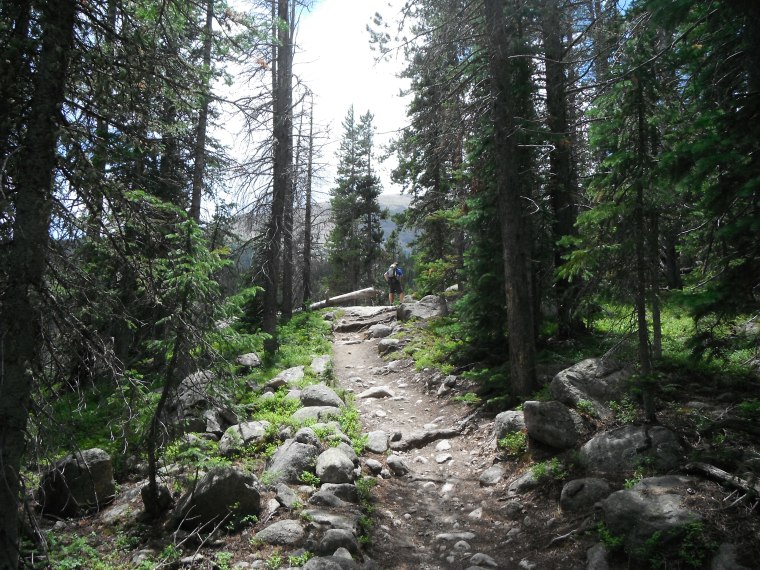 Thanks to some afternoon monsoons, my flight was delayed out of Durango several hours, and I didn’t get into Denver until the early hours of the morning. Luckily, the hike to the cabin was only seven miles, which allowed us the luxury of sleeping in and getting a late start. After eating breakfast on the porch of Austin’s park service residence – an old but charming wood house situated next to a small meadow and mountain stream – we packed up and headed for the trailhead.

Another advantage to staying at the cabin was that we only needed to pack in food and clothes. Our light packs made for a fairly quick hike, and we made it to Thunder Lake by mid-afternoon. 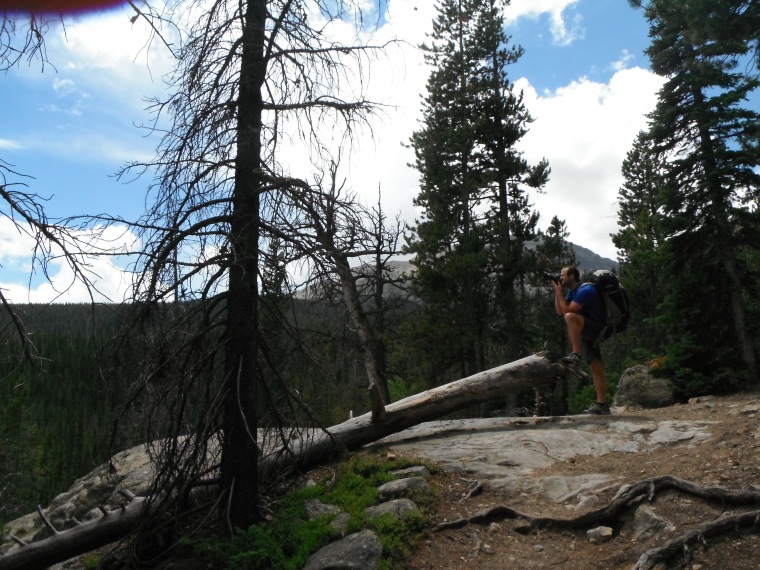 I was so delighted by all the water and greenery as we made the gradual climb that I barely noticed my exertion. It has been a dry summer at Mesa Verde, and while our flowers had died weeks ago, the alpine meadows at Rocky Mountain were blooming. I hadn’t realized how much I missed the green cover of large trees until I found myself shaded among them. We call our Pinyon and Juniper at Mesa Verde ‘the pygmy forest,’ because all of our vegetation is stunted by the combination of high altitude and lack of water. The high desert certainly has its beauty, but I found myself joyous to be immersed in this new, fertile, colorful place. What thrilled me the most was the water – it was everywhere. Not a moment went by on the trail where I could not hear the rush of a stream or river somewhere in the woods. Sometimes the water was in clear view, sometimes it was miles away, but I can’t tell you the comfort that sound of life gave me as we made our way higher and deeper into the mountains. Best of all were the waterfalls that sometimes appeared out of nowhere. Water in such abundance is not something I’ve seen since I’ve left the east coast. To me, it all seemed like magic. 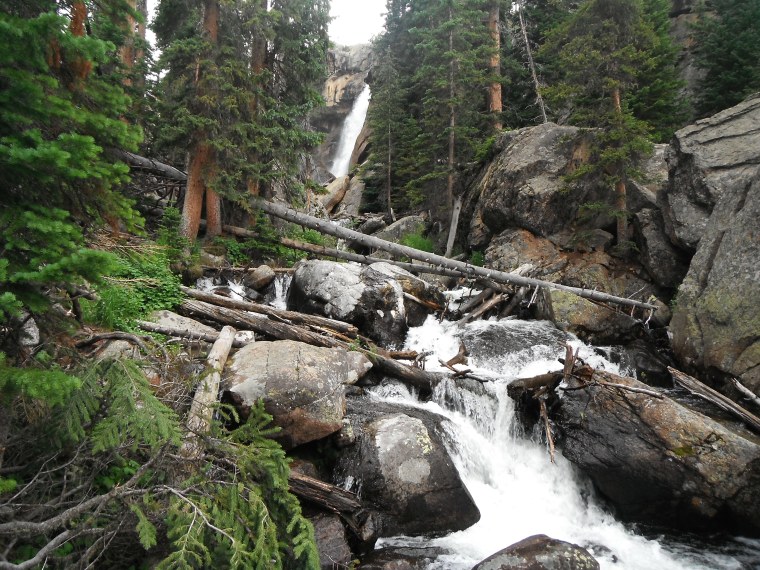 A sign soon announced that we had reached the Thunder Lake campground, which comprised of only a few campsites, a privy, and a corral – you can ride horses in the backcountry at Rocky Mountain National Park, an adventure I’d love to take on one day. Austin and his crew sometimes use horses to get around – but more often they hike and use llamas to pack in equipment. Apparently the llamas, although not native, are sprite and strong and not too intrusive on the environment. We found several signs along the trail that advertised that llamas were the only pack animals allowed in a certain area. This greatly amused me. 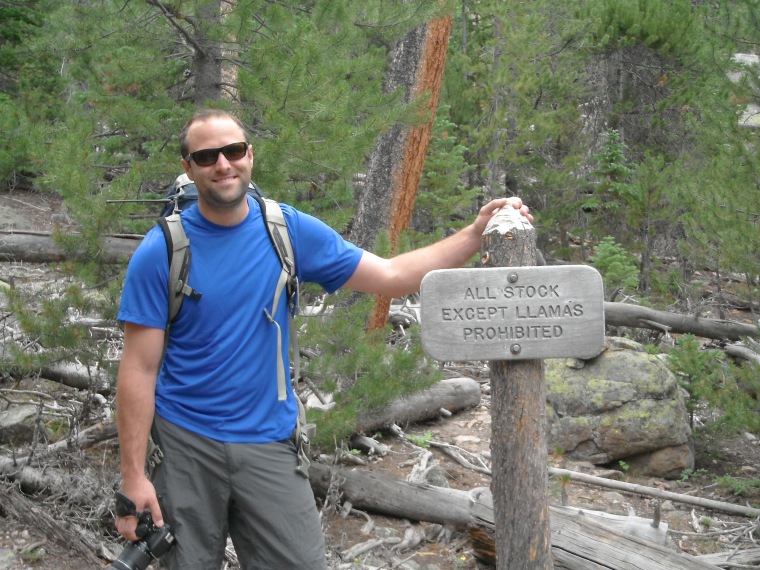 Coming out of the trees from the campsites and into a clearing we got our first view of Thunder Lake – or I should say, I got my first view – Austin gets to come here all the time and call it ‘work,’ the lucky duck. It was spectacular. We were right at tree line. A clear blue lake sat at the base of several towering granite peaks. There was nothing anyone could have done at that moment to wipe the smile off my face. 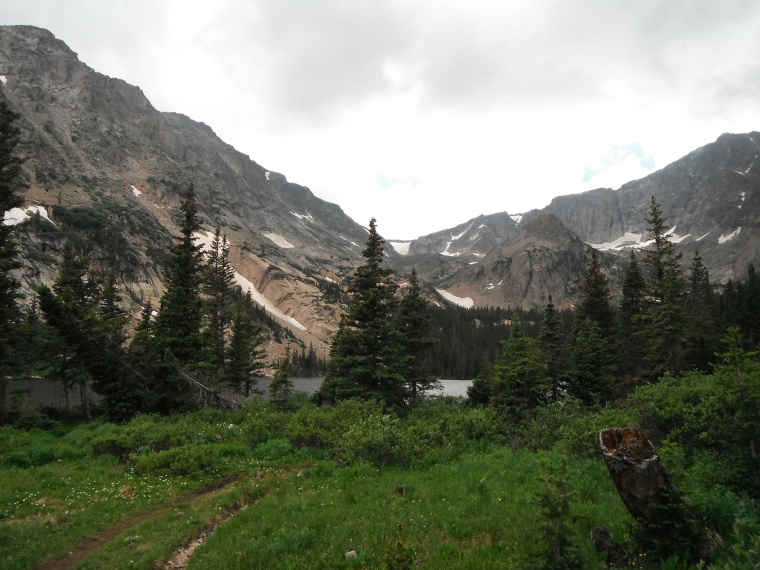 My grin only got stupider as I spotted our home for the evening. A small, one-room log cabin sat right at the foot of the lake. We had the best views in the house and a wood burning stove to boot! It was perfect.

Soon after our arrival the sheer sheet of clouds that had shaded us throughout the day turned thick and black.  It was then that we learned the meaning of the name ‘Thunder Lake,’ and from our safe spot in the cozy cabin it couldn’t have been more spectacular. Austin surprised me by pulling out a bottle of fine wine he had hidden in his pack and hiked all the way in. The chocolate that he pulled out next sealed the deal – I was in heaven.

The storm passed a little too quickly and we headed out for a sunset walk along the lake. Much to my delight small pockets of snow still sat here and there above the frigid waters. Austin pointed to the peaks above us. Just behind them sat the continental divide. There was a route up to the ridge from our cabin, but there wouldn’t be time on this trip – another adventure for another day.

After a candle-lit feast we climbed the ladder to the cabin’s loft where we stacked up all of the sleeping pads there were and climbed into our bags. We awoke in the morning to the bluest skies there could ever be. 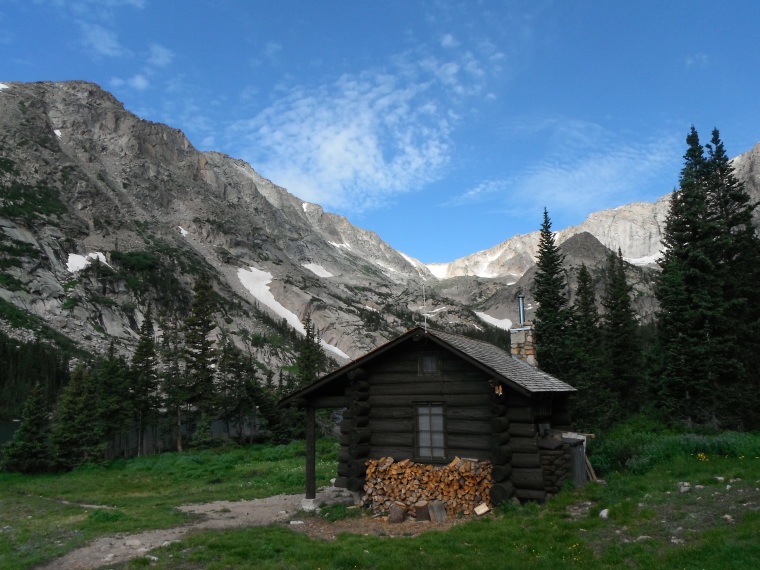 After a pancake breakfast we prepared to leave this paradise, but not before writing a short entry in the logbook that documented the last decade of happy visitors. We had read many of the entries as we sat out the storm the night before, and were thrilled to find that many of our Park Service friends had also enjoyed this special place. People we hadn’t even realized had worked at Rocky Mountain left their notes and recollections, and now years and miles later here we were, reconnected with friends old and new. The park service is a small world.

We took a different, slightly longer route down then we had up, passing two more spectacular waterfalls I hadn’t seen before arriving at the trailhead in what should have been the heat of the day. Instead we were blessed with a rain so refreshing that neither of us bothered to put on our coats. Soaked to the bone but still warm, I found that stupid smile still plastered to my face as we threw our gear into the car and drove back to Austin’s park residence. 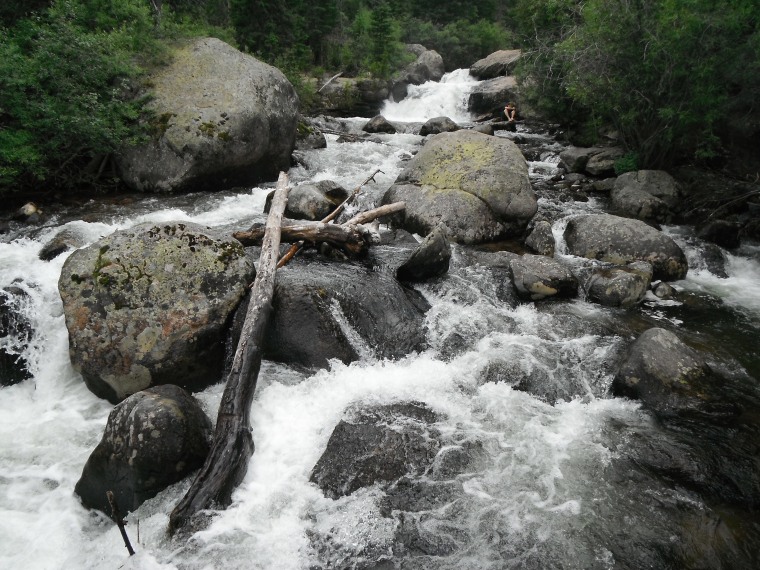 It continued to rain throughout the day, so Austin took me on a driving tour of the park. We hit the major visitor center and overlooks, but I have to admit, I was distracted. I knew that my personal park tour would end at the llama pen, and I had been dying to meet these funny looking critters ever since Austin had first told me their names. Mister, Luxor, and Romeo were some of the hardest working employees in the park. 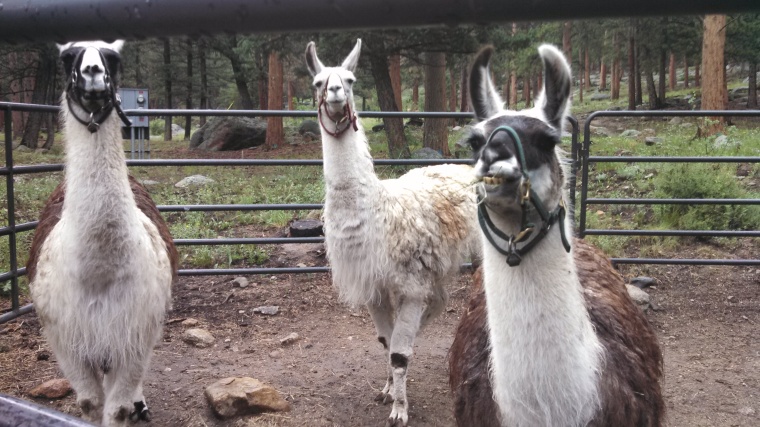 It was a Sunday, so the backcountry offices were empty, and it was just us as we approached the home of the funny animals. Austin recommended we feed them, but warned that they weren’t particularly expressive or able to bond, and so they wouldn’t eat from our hands. I stubbornly tried anyway, willing the animals to love me as much as I instantly loved them and their strange, funny expressions. Much to my delight, the llama named Romeo – a short, stocky fellow with a ghastly underbite, stepped forward and hesitated only a moment before chomping at the straw in my hands. I laughed uncontrollably in my triumph while Austin snapped pictures. I was less successful with the other two. Mister seemed to consider me, but decided in the end against it. Luxor, true to his royal namesake, stood stoically several feet away, uninterested. None of them hesitated when Austin filled their basin. They didn’t look up as I waved goodbye. 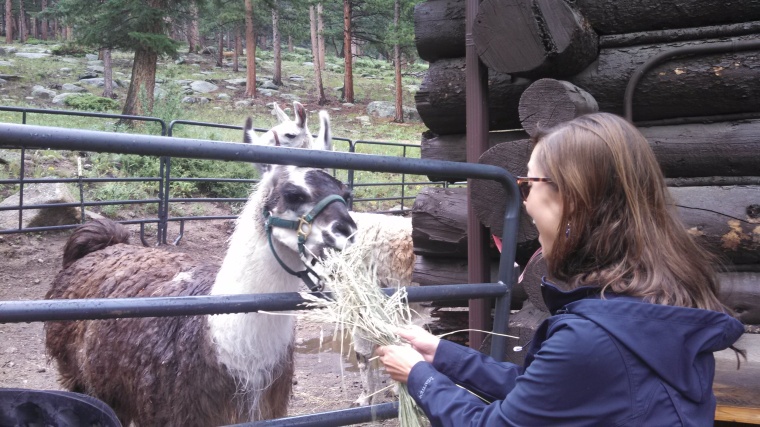 My only regret in my visit to Rocky Mountain was that I couldn’t stay longer. And I will admit that I said a silent prayer as Austin dropped me off at the airport so that maybe, just maybe, I could get a job here too next summer.

Keep your fingers crossed for me. 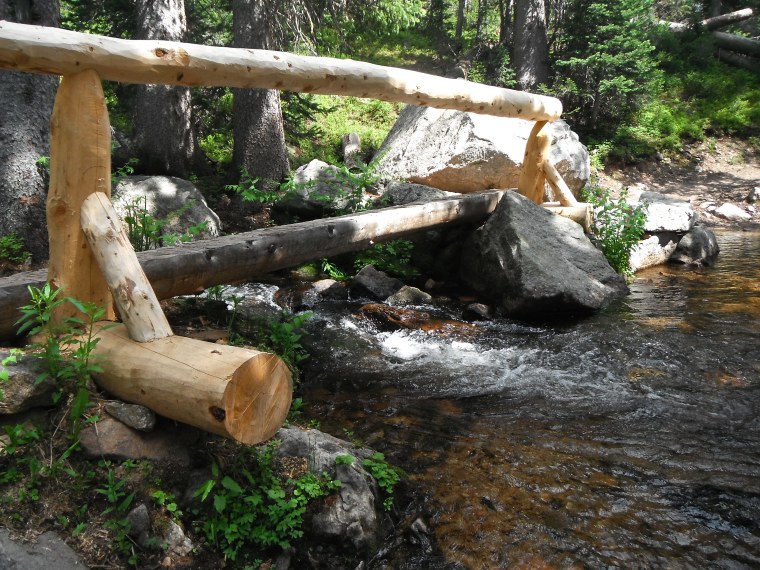