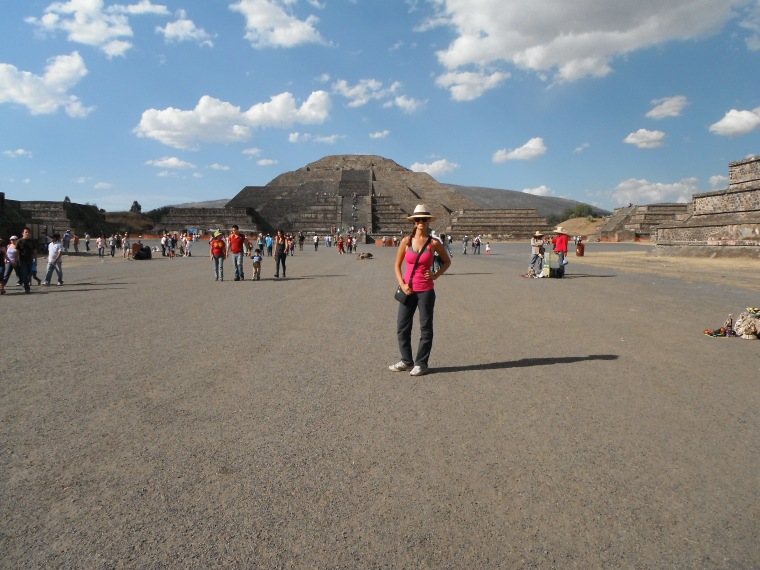 Teotihuacan was one of the few places I knew I wanted to visit when embarking on this trip to Mexico. Home to some of the largest pyramids in the pre-Columbian, Mesoamerican world (actually, they are some of the largest pyramids in the whole world), Austin and I decided to make the site the grand finale of our fantastic trip. So on our last day in Mexico we got up early and headed out.

First, of course, we had to get there. From our spot in Mexico City’s historic center, it would take us about an hour via subway to get to the bus station. From there it would be a one hour bus to the ruins. Not thrilled about the idea of the necessary four hours of travel time (not including waiting around for the bus!) should we go on our own, and fresh off our amazing tour experience in Oaxaca, we decided to book a tour through our hostel.

I’m not going to go into the gory details of how awful our tour guide was, or how completely stupid most of the stops on the tour were, because I don’t really care to remember that and I doubt you would care to read about it. But I will make this recommendation: should you find yourself staying at Mexico City Hostel and considering booking their Teotihuacan tour: don’t. 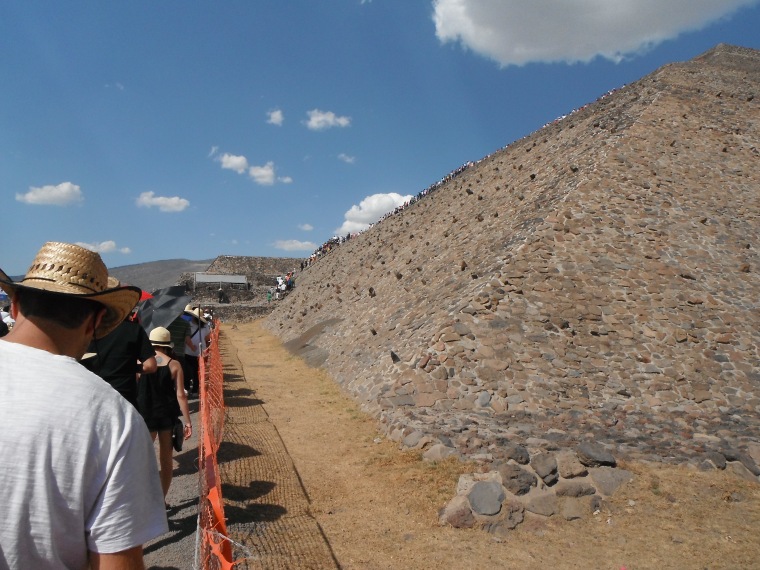 When we finally arrived at the pyramids it was three o’clock (our tour had left at 9), sweltering hot, and extremely crowded. It was the day before Easter, the height of Semana Santa festivities, and every tourist within a hundred mile radius seemed to be converging on Teotihuacan. To be honest though, I didn’t much care. I had waited so long to be there, that I would have been thrilled no matter what the circumstance. I really only mourned for the pictures – every one destined to be filled with people rather than pyramids. But I was comforted when I reminded myself that this was once a great city, that surely in its heyday the streets of Teotihuacan were much more crowded than this.

We entered through a side gate directly next to the massive Pyramid of the Sun – so big that it blocked our view of the rest of the site. We immediately got into line so that we could climb to the top. After about ten minutes or so we rounded a corner and started to catch glimpses of other pieces of the site, but soon it was our turn to climb, and I was too excited to look any direction but up. 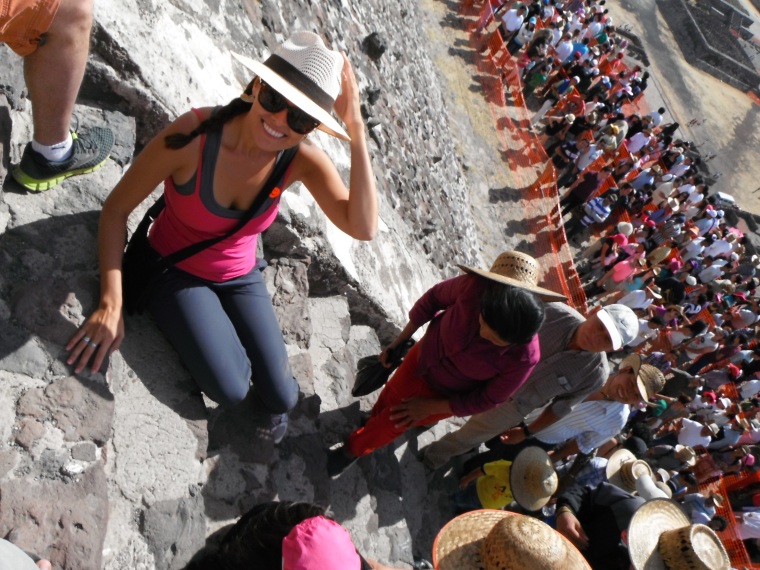 It took us thirty minutes to reach the top – that’s how massive the Pyramid of the Sun is. Granted, some of the time was spent waiting in line, and we may have moved faster without the crowd, but it was still a hefty climb. Once at the top we were rewarded with a 360 degree view of the valley, the people, and the ancient city itself. 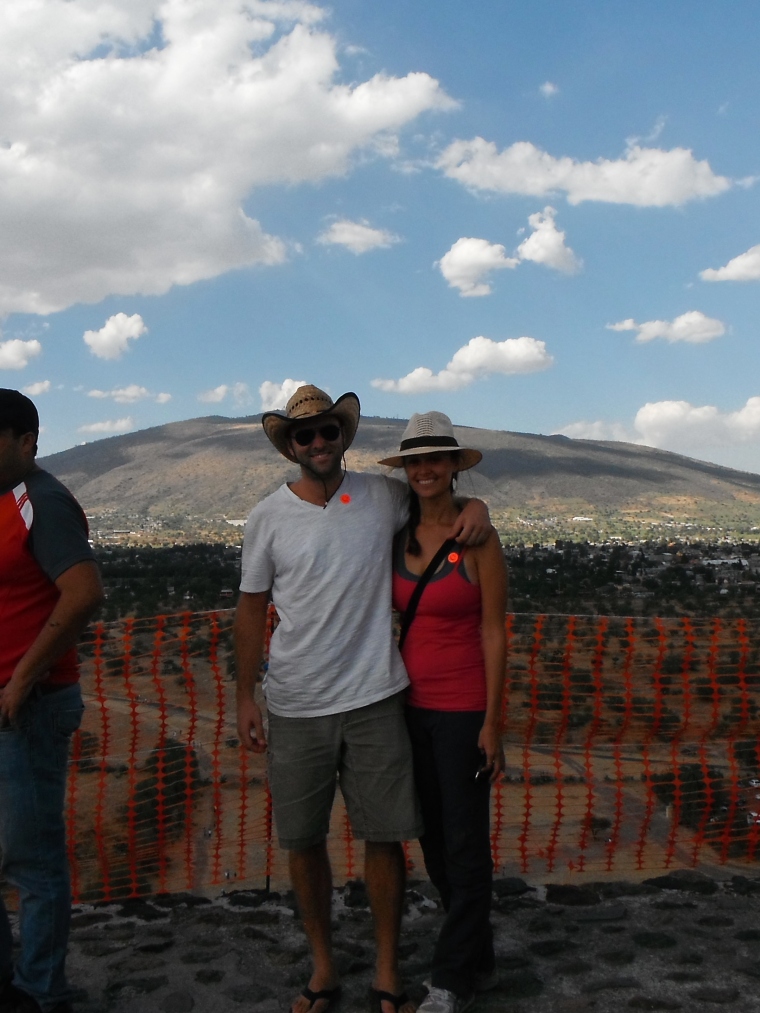 Climbing down the pyramid was much quicker than climbing up. And after jumping down the last few steps we got our first real view of the pyramid we had just climbed. It had been too close to see it in its entirety before, but a couple steps back now and we were able to take it all in. Imagining the sparkling temple that once stood at its top, it’s no wonder to me the massive influence this place had on cities hundreds of miles away. It must have been awe-inspiring to view this city at its height. Certainly I felt full of wonder over 1,500 years later. 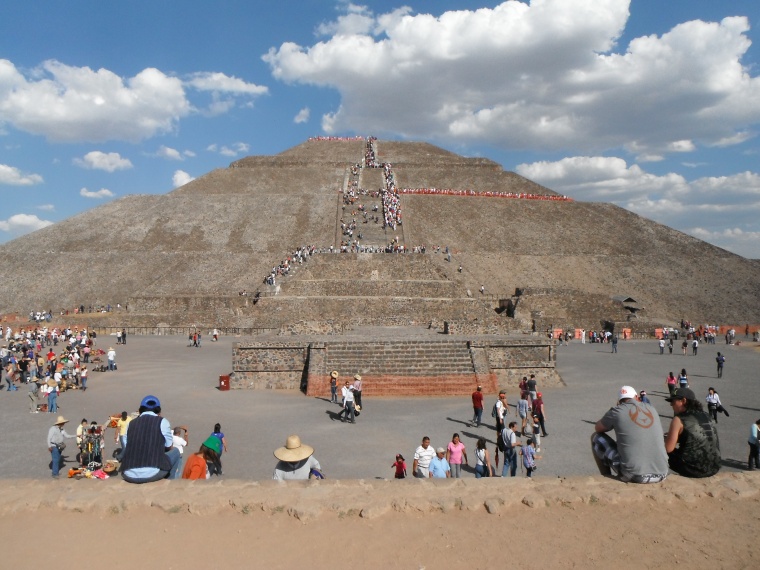 There was still more to see – the smaller but also striking Pyramid of the Moon, the 2km-long Avenue of the Dead, hidden carvings and murals – every view and discovery was jaw-dropping. Heavy with the sad knowledge that this was our last day in Mexico, the wonder of this ancient city kept the smiles plastered on our faces. And as we boarded our van and headed back to Mexico City – skin warm from the sun, muscles tired from the climb, and hearts happy from the vistas – I couldn’t help but think:

What a perfect, grand, finale. 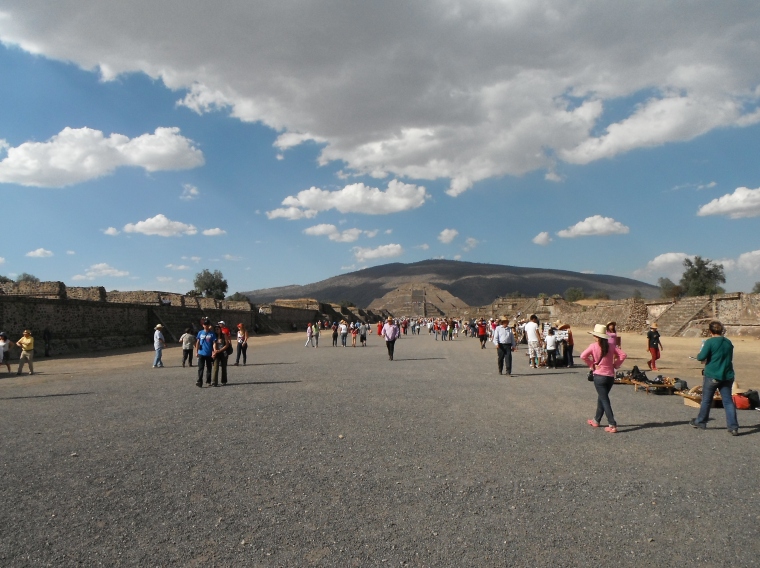