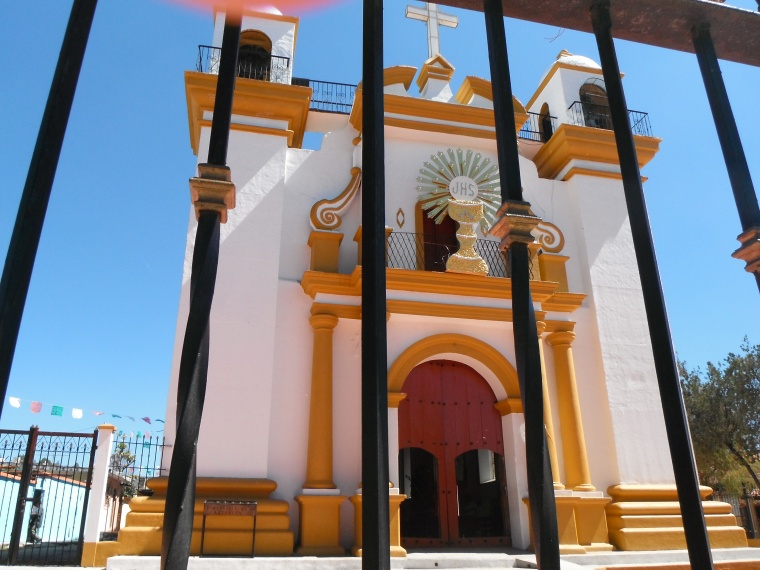 I loved San Cristobal, but I wouldn’t be being honest if I didn’t at least mention the darker side of the history of this place and the situation that has resulted. Because unlike many other places with blemishes in their past, it’s almost impossible not to be faced with the realities of this dark side during a visit to San Cristobal.

Much like many modern countries that have resulted from the times of imperial colonization, Mexico has a large indigenous population that has been majorly oppressed over the course of history. Today this population for the most part makes up the very bottom ranks of the social-economic strata. In no place is this kind of poverty more evident than in Mexico’s southernmost state and San Cristobal’s home, Chiapas. It is likely because of this that the area has become the heart of the Zapatista movement, and in January of 1994 the leftist guerrilla group occupied San Cristobal and a number of other southern cities in protest. Though the group had a number of complaints, this uprising was incited by the signing of The North American Free Trade Agreement.

As an American-born daughter of globalization, I have to admit, I didn’t get it. I always thought of ‘free trade’ between countries as a good thing. My negative-leaning confusion only increased as Austin and I wandered the city on our first day. You couldn’t take five steps without being accosted by a native-dressed person, trying to sell you something. Worse were the children. Every five minutes they’d show up at your table, trying to sell you a toy or a key chain, or sometimes nothing at all. They were aggressive and persistent. When you told them you didn’t want what they were selling they would turn to you and whine. “Dame un peso,” they’d say. No matter how many times you said no, they would stay at your table, or follow you down the street, crying like a spoiled child might cry for an ice cream cone. At first I found it immeasurably sad. But if I’m honest, it happened with such frequency that it started to grate on me. Whenever I saw a child on the street – begging or not – I would cringe and try my best not to make eye contact. Sometimes that worked, often it didn’t  I’m not proud of my reaction. The experience left me feeling repulsed both by them and myself.

I never gave anyone a thing. And for that, I’m not sorry. I would have liked to help them. But their appearance at my side at all times of the day and all days of the week made it very clear that these children were not where they needed to be – school. They were not learning a useful skill whining on the street. And it sounds harsh, but who knows whose influence they were under. Who knows how much of the money they made actually went to them. I hated to see them suffer. But I hated more the system that put them in that situation. And I didn’t want to do anything to encourage it. I wished my Spanish were better. I wished that I could explain to those children that no, I wouldn’t buy their wares because I didn’t believe they should be selling them in the first place. Because I didn’t want to give their families a reason to keep them out of school, to keep them from playing and being care-free and enjoying a childhood. I couldn’t say that of course. Instead I just averted my eyes and nodded my head.

We witnessed demonstrations on a daily basis. Every morning a group either marched down the street or stood outside the courthouse. There were usually a dozen or so adults, and many, many children. They chanted the same thing every time. Austin and I weren’t sure, but we think it translated to ‘We are desperate, we want a solution.’ Very often only one adult would be shouting that through a loudspeaker. The rest stood silent while the children chanted along blindly. The first time I saw this I was enraged. I felt they were using the children to garner sympathy. You want a solution? How about letting your kids go to school instead of making them follow you around chanting all day? I hated it.

Over dinner the first night I expressed to Austin my conflicted emotions about my frustrations. I told him I felt that I wanted to help, badly, but that I didn’t know how. From my narrow perspective it seemed that this culture of begging and whining may be beyond help. I felt the demonstrations were an excuse not to work. I judged the native population very harshly.

But he saw it a little bit differently. “This is only a shell of a people,” he told me. He reminded me of all those incredible ruins we’ve seen, those great civilizations, and that those are the ancestors of the beggars I was becoming so disdainful towards. They were once an organized, thriving, great people. But when the Spanish came they killed all who could lead, they imprisoned anyone with strength, the quashed everyone with a will. They took all their land and made themselves wealthy at the cost of the indigenous people. Now this once great civilization has been driven to desperation. We shouldn’t judge them for these circumstances that have always been out of their control.

That night we went to see a documentary about the Zapatistas. I approached it with a much more open mind, and started to understand.

The children on the streets of San Cristobal are driven to the city because their families have no fertile land from which to produce sustenance. All of that was taken by the Spanish, and because of that they cannot inherit it. They also cannot buy it, because they have no sustenance to begin with. It’s a vicious cycle. The Zapatistas opposed The North American Free Trade Agreement because it took away the last opportunities these people had. Import/exportation may be good for large governments but on a local scale, they’re often impossible to compete with. They also wanted land. They wanted a chance to work and prosper like everyone else. They were tired of being set up for failure.

Although they got the government’s attention with guns, they took every chance at peace they could get. They attended many talks and adhered to several cease-fires. But the government broke their promises as quickly as they made them, and little progress was made. Worse, they sent the army to occupy Chiapas and hired paramilitary groups to carry out a bloody campaign of intimidation. They incited the Zapatistas to action in order to paint them as the villains.

The struggle continues today. In our hostel we met a French man who spends half the year living in Cuba. Before Austin even had a chance to ask the man told him that yes, he was a communist. He had been in San Cristobal for a month and was attending local Zapatista meetings. Though I don’t think I’ll become a communist any time soon, it was interesting to talk to him. “In Cuba, they say that the first victims of America’s flawed ideologies are Americans,” he told me one night over rum and wine. Just a few days before I would have taken that statement as very harsh. But it has truth to it. It was my idea and belief in the “American Dream” – that anyone can come from anyplace and become anything – that caused me to initially turn my nose up at the plight of the local people here. But outside of the US, that’s not a truth. Actually, inside the US, for a lot of people, it is not a truth. My situation has set me up nicely to achieve whatever I’d like to achieve. But I wasn’t born to a family with, literally, nothing. That is the situation that millions are born into every day. And really, how do you make something out of nothing?

Several times during my stay in San Cristobal I saw this T-shirt – it was a comic-style scene with the Zapatista Subcomander Marcos fighting Captain America. The first time I was shocked, the last time, I chuckled.

My experience in San Cristobal de las Casas was bittersweet. The city was beautiful, but it wasn’t easy to be faced with such a large and inescapable oppressed population. Still, I am thankful for every experience there. Because now I look at the world with just a slightly wider lens. And that’s why travel is so important. Every lesson learned makes the world a bigger place. The realities of that bigger world may not always be pretty, but in order to make this world a better place, in order to be the best person that I can be, they are so, so necessary. 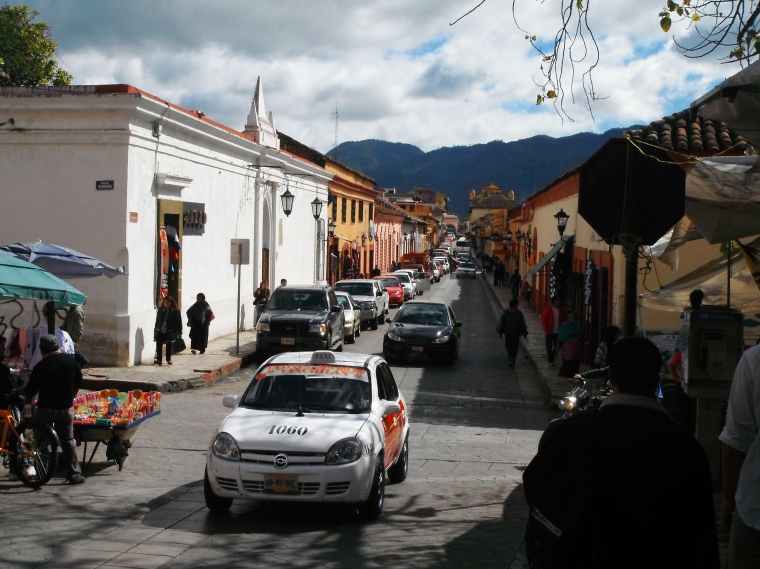 4 thoughts on “The Darker Side of San Cristobal”