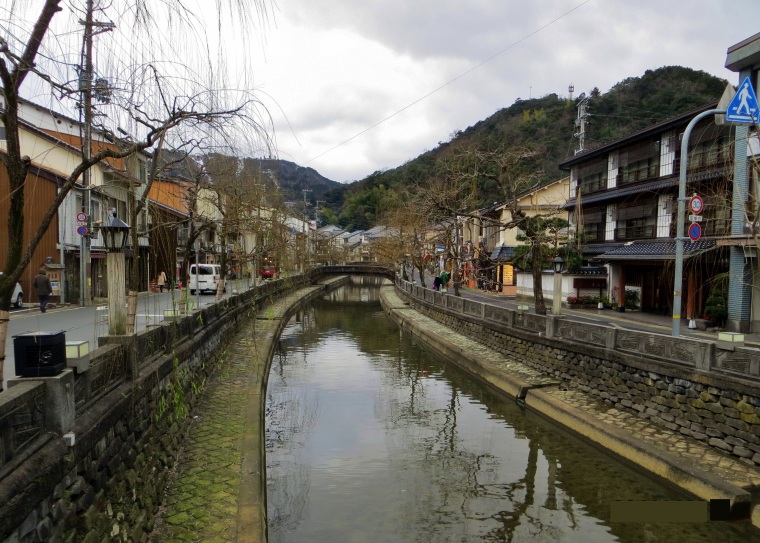 I knew the traditional Japanese onsen experience was something I wanted to try the minute I read the accompanying translation: hot springs.

I figured that after several weeks of travel a hot spring excursion would be a great way to relax and wind down. So after reading my Japan guidebook cover-to-cover, I decided to schedule a trip to the onsen town of Kinosaki with high hopes of what had been described in many places as one of the greatest of Japanese traditions.

While I was excited to get to Kinosaki, I definitely had some reservations. The biggest one was that the onsens were supposed to be a very… erhem… ‘natural’ experience (aka – people go naked). To be honest, I hadn’t thought too much about it before our arrival in town. I figured naked was just the preference, but that if I really wanted to, I could wear a bathing suit. I wouldn’t call myself a prude by any means, and my uncertainty of being naked in public simply stems from my dread of being the center of attention. With that in mind, I decided that the best way to call as little attention to myself as possible was actually to go in the buff – rather than being the only one in the spring with a bathing suit. I figured it might be a little nerve-wrecking to begin with, but hey, this was exactly the kind of comfort zone-stretching experience I was looking for when I decided to come to Japan in the first place. Besides, most onsens are separated by sex – so what was there really to worry about?

Well as it turns out, after my first few days in Japan I quickly discovered there might be a lot to worry about. To the western eye, the Japanese have a lot of social rules that aren’t always on display for or explained to foreigners. The onsen experience is a great example of a situation where these implicit rules are followed religiously. I was vaguely aware of a few of those rules as we headed to Kinosaki – change into slippers before stepping on wood floors, take off your slippers to step on tatami mats, switch into the bathroom slippers when it’s time to do your business, and make sure to leave the bathroom slippers in the bathroom when you’re done. Okay, so mostly I knew about the slipper-related rules. I also knew it was very important to shower before you get into the onsen. I was totally good to go… right?

We were presented with cotton kimonos called yukatas upon arrival to our guesthouse in Kinosaki – presumably to wear to the onsen. As I examined the two-layer garment I started to get an inkling that I was in over my head. Upon googling directions on wearing the robe I discovered that something as easy as crossing the wrong side over the other was not only improper – it implied I was a dead person (it turns out the Japanese dress their dead with the right side of the yukata crossed over the left). And I never did figure out how to correctly tie the obi. Update: Actually, just now while I fact-checked how to wear the yukatas I discovered that wearing the bow of your obi in front implies you’re a prostitute. While we didn’t tie our obis in bows, we did tie them in front… oops. 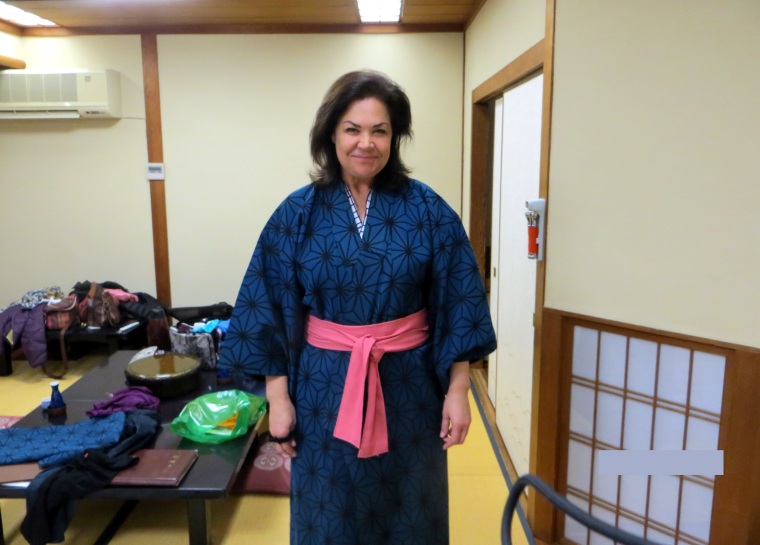 After realizing how many ways I could go wrong simply getting dressed for my walk to the onsen, I decided a little bit more research might be necessary before diving into this experience – and that turned out to be a good call.

I brought up as many blogs and articles as my phone could handle, and learned the particular way of washing yourself before entering the onsen (wash off the stool, sit down, lather, scrub, repeat), and that only a small hand towel is allowed beyond the locker room (so much for the possibility of hiding behind that little cloth). I also learned that while it is okay to set your now wet hand towel (because you used it to shower, duh) to the side of the pool or even on your head in order to cool yourself down, it is sacrilegious to allow any part of it to touch the clean onsen water. It’s also a big no-no to allow your hair to touch the water or to get in with even the slightest of soap bubbles on your body. And remember how I thought I would be able to wear my bathing suit if I really wanted to? Well actually… no, I couldn’t.

Refreshing ourselves on all of these rules, mom and I enjoyed some dinner and way too much sake, before deciding we might as well get the first dip done and over with. 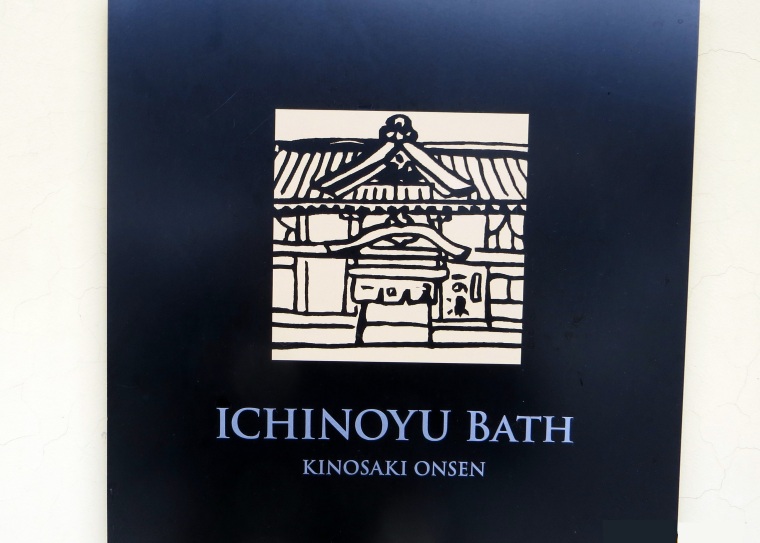 There are seven hot springs in Kinosaki, and in a fit of nervous giggles, we made our way to the closest one. Stepping into the locker room, I felt my previously sake-dulled senses immediately sharpen. I was terrified.

Back at home, whenever Austin and I find ourselves in a place with hot tub access, it’s not unheard of for me to head back to the room if there are other people in the tub. While I don’t like crowded places, I can generally handle them… except in this context. The idea of sitting in a pool of hot water and either forcing conversation when I just want to relax, or doing everything I can to avoid eye contact so I don’t have to make conversation with the half-naked strangers with whom I’m sharing this hot, small space just kind of freaks me out. And the possibility of a knee bump? I can’t do it and enjoy it too.

I must have read dozens of blogs recounting a first-time onsen experience for some nervous traveler back in our room at the guesthouse, and not one of them mentioned crowds like what we saw in Kinosaki. That locker room was packed. My anxiety overcame me. Mom and I took one look at each other and bolted. 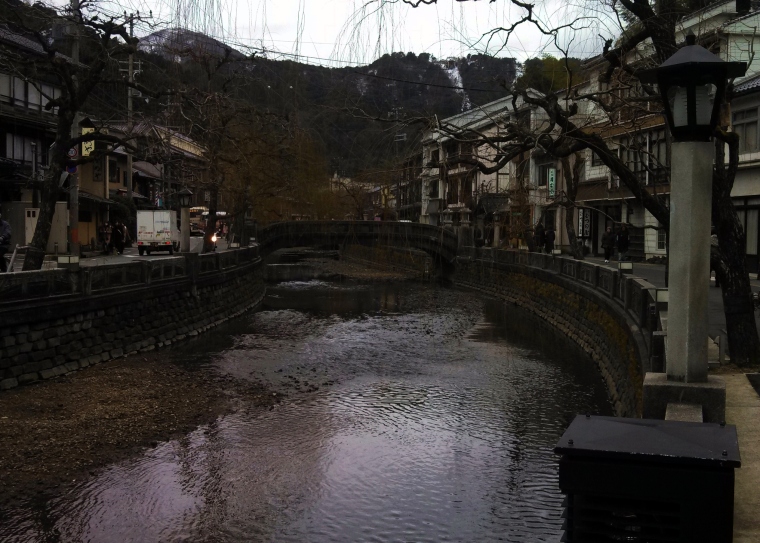 After catching our breath outside, we decided we had to give it another try. Maybe the next one wouldn’t be so crowded

We found the next onsen just around the corner, and the stacks of shoes out front didn’t bode well for our hope of a quiet locker room. We went in anyways, and found the locker room just as crowded. It must have been a school holiday weekend or something, because it seemed like the whole room was filled with large groups of college-aged girls. Awesome. Cliques. Because I wasn’t intimidated enough. I felt like I was in high school again, except this time, I had to get naked!

But even in my horror, I was torn. While I wanted with every inch of my being to scream, cry, and run as fast as I could away – the logic in me pointed out we had gone three hours out of our way to come to this town just so we could try the onsens. I took a deep breath and started undressing.

It was around that moment that mom had a minor panic attack. She and I share very similar anxieties, and while I was nervous but otherwise okay with the nudity portion of this adventure, she had articulated early on in the planning of this trip that she was very uncomfortable about this. She announced she was going to use the restroom and swiftly disappeared.

I froze. I was in my underwear and had no idea what to do. While nudity is certainly not shameful in Japan, I also didn’t think it was cool to just hang around and check people out. I desperately wanted to appear busy. So I stupidly circled around as if I was looking for something. During that time I got a glimpse out towards the pool.

Inbetween the locker room and the onsen was a glass pass-through room that also seemed to double as a shower. The shower didn’t look anything like the ones described in the articles I had read. It was stand-up rather than sit-down, with no partitions other than the glass wall. On the opposite side of the shower was the pool itself, and I was crushed to see that not only was it small, it was also packed. I honestly didn’t see a way of getting in without slapping butt cheeks. And after all the weeks of loaded expectations, the onsen was just a concrete pool filled with (presumably hot spring) water. These were not the natural hot springs I had imagined. These were bathhouses. This wasn’t the first time something has been lost in translation on this trip, but it was probably the most disappointing.

I turned to see mom emerging from the bathroom, and immediately noticed a few of the older ladies in the room staring sharply at her. It all seemed to happen in slow motion. I watched their disapproving stares move from her to me, as if to say ‘How could you let this happen! Shame on both of you!’ Panicked, I turned my attention back to mom, only to see that she had forgotten to remove the bathroom slippers and was now contaminating the locker room with, based on the magnitude of stink-eye happening at the moment, what could only have been the vilest of filth.

I literally yelled it, which only got the attention of everyone else who hadn’t yet noticed. Her eyes widened in an expression I can only describe as complete and utter horror. We tied up our yukatas (incorrectly, as it turns out) and fled.

So… did I wind up getting naked in public after all? Click here for part 2!