According to Wikipedia, about 20% of Japan’s National Treasures and 14% of the country’s Important Cultural Properties are located in Kyoto. Home to 17 UNESCO World Heritage Sites, the ancient sight-seeing options in this city are enough to make your head spin. Mom and I hit a big chunk of these sites during our whirlwind 4 day tour of Kyoto, and by the end we were pretty pooped.

It would take a tremendous stamina and more time than we had to visit all of the beautiful temples in Kyoto. Which ones are truly worth a visit is probably subjective and will vary from person to person. But I can tell you that for us, there were four clear stand-outs I wouldn’t recommend you miss. 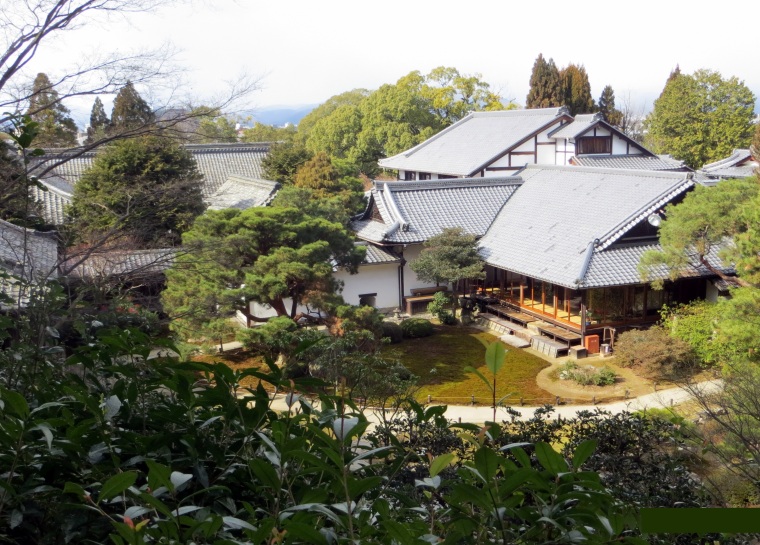 Shoren-in is a beautiful 13th century Buddhist temple that didn’t make the list of Kyoto UNESCO World Heritage Sites.  But that might make it even more worth the visit. This temple was the first we visited in Kyoto, so at the time I really didn’t appreciate the quiet. But after hitting some of the more famous temples in the area, I soon realized how much of a jewel Shoren-in is.

The interior is lovely and traditional, and the gardens were one of the most beautiful of all we saw in Japan. The complex is anchored by several gorgeous camphor trees that are said to be over 800 years old.  The weather on the morning we visited made the experience particularly surreal, as low clouds parted to let the sun shine through while dropping light, fluffy snowflakes. Unfortunately our cameras could not adequately capture the shimmering flakes, but watching them fall through those massive trees created an atmosphere that was truly magical. 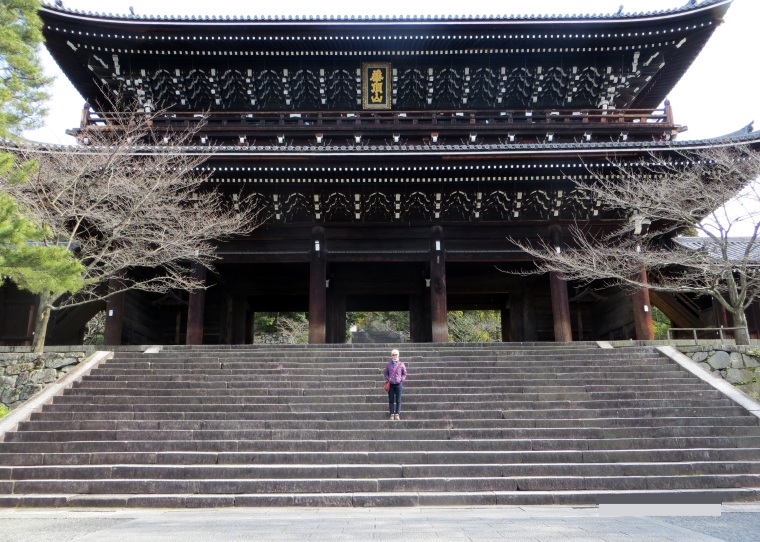 Just a short walk from Shoren-in, most of the buildings in this large complex were under construction and covered by an ugly metal shelter during our visit. However, Chion-in’s large entry gate – called the Sanmon – made this visit more than worthwhile.

The Sanmon dates to 1619 and is said to be the largest wooden gate structure in Japan. We were incredibly lucky to find that the inside of the gate was open to visitors on the day we stopped by (we were led to believe by the ladies selling tickets that this is not a common occurrence). Photos were not allowed at any point past the ticket counter, but trust me when I say it was magnificent.

After climbing a very steep set of wooden stairs in slippery socks (no shoes were allowed in the Sanmon), we emerged on the wrap-around balcony at the upper level of the structure. From here the views of Kyoto and the surrounding mountains were sweeping. We mourned our forbidden cameras as we made our way into the large darkened room that sits behind the balcony. As our eyes adjusted to the low light we began to make out the figures of several statues along the long wall. The detail of the wooden statues came to life before us as the dark turned to dim light. A golden Buddha sat at the center, flanked on either side by sixteen arhats, or ‘one who has attained nirvana’. On the ceiling were scenes of hand-painted dragons. We could not understand what the guide lecturing a small group of Japanese tourists was saying, but we followed the direction of his pointed fingers anyway, and without disappointment. 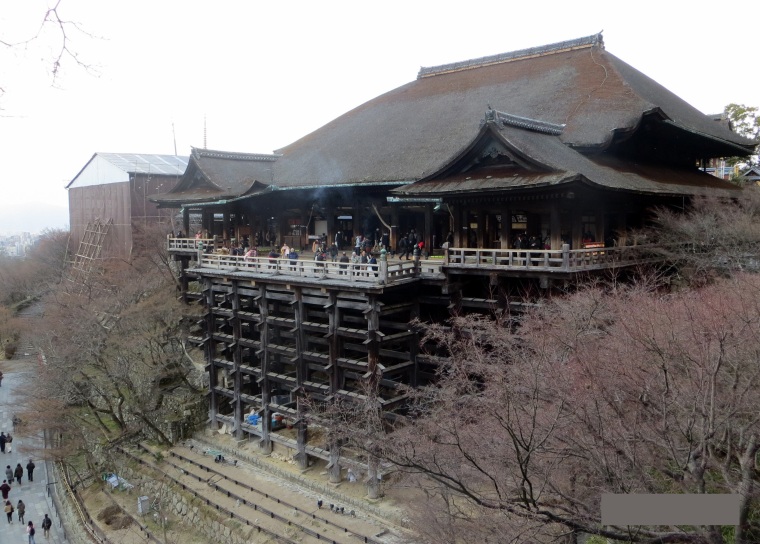 It is said that not a single nail was used in the construction of the large temple at Kiyomizu-dera. Named after the waterfall that drops through the grounds (though it ran disappointingly low during our February visit), this spectacular complex is home not only to the striking temple, but also a gorgeous view of Kyoto and several interesting shrines.

The Jishu shrine, dedicated to the god of love and good matches, is one of the more popular shrines on the grounds. Here there are set two stones twenty feet apart. Legend has it that if you can walk from one stone to the other with your eyes closed, you will find your true love. Performing this action is made significantly harder by the placement of the stones in the middle of the sidewalk, where lots of unsuspecting visitors are passing. You can complete the walk with help from others, but reaching the other stone successfully in that case will mean you will need the help of someone else to find your true love. Mom and I did not get to try this fabled walk on our visit, but we did enjoy watching several groups of uniformed school children attempt the tradition in fits of giggles.

My favorite area at Kiyomizu-dera however, was the Tainai-meguri. This dark path is said to symbolize the womb of a female bodhisattva. The man at the top of the stairs instructed us to keep our left hand on the handrail at all times. At the bottom of the steps we realized why. We were enshrouded in total and complete darkness. The experience of walking through the pitch dark guided only by the rail was exciting and disorienting. Then it seemed that out of nowhere a single rock appeared under an illuminating light. We were told to spin the rock and our wish would come true. My wish hasn’t been granted just yet, but I’ll make sure to keep you updated.

Often referred to as The Golden Pavilion, Kinkaku-ji is one of Kyoto’s most famous attractions, and is absolutely worth braving the crowds. The placement of the pavilion covered in gold leaf above a serene lake creates a striking reflection on the water even on a cloudy day like the one on which we visited. This version of the structure was rebuilt in 1955, after a crazed monk burned the original structure down. The grounds are also home to a teahouse and a beautiful garden.

A trip to Kyoto is not complete without a day of temple-hopping. And I am sure to be dreaming of gold accents, reflecting ponds, and manicured gardens for many nights to come.

3 thoughts on “My Favorite Kyoto Temples”