My co-worker greeted me immediately as I arrived to relieve him and start my shift at Spruce Tree House.

“Thank God,” he said, “I didn’t think I could stand these guys for another minute.” He gestured with his thumb to a large group of Japanese tourists. “They just can’t stay off the walls.”

“Awesome,” I responded sarcastically as he suited up for his hike back up the hill.

“Yeah, good luck” he said with a crinkled nose before walking off.

I faced the site tensely. They were a large group, but I didn’t see any current wrongdoings, so I let my shoulders soften and broadened my mouth into a smile. Almost immediately I was approached politely by some members of the group. They didn’t speak English, but I could tell by their motions that they wanted to know if it was alright if they took my picture. Usually people don’t ask at all, so I smiled and nodded. A few moments later I felt a tap on my shoulder. A small, old woman pulled out a piece of paper. She folded it into the shape of a peacock and held it out to me. A gift.

I smiled hugely. I hugged her. It was so far away from the experience the previous ranger had had. I felt happy. And lucky. Another lady approached me. She asked a question in broken English and we talked for the better part of ten minutes. A crowd gathered as she translated the questions of her fellow travelers. Their questions were well-thought out and intelligent, if not a little difficult to translate. Not a single person asked where the Ancestral Puebloans pooped or what the big round rooms were for. They had read the literature and were well informed. Our conversations were a joy.

As their leader motioned to them that it was time to leave, another old lady approached me. She was tinier than all the rest, and appeared very frail. She too pulled out a piece of paper, this time molding it into the shape of a crane. She pulled on its tail and the origami bird flapped its wings.

“Beautiful,” I told her as I accepted the gift.

“Ranger beautiful,” she responded with a smile, before waving and walking slowly away.

Pretty amazing the gifts a smile can bring you huh? 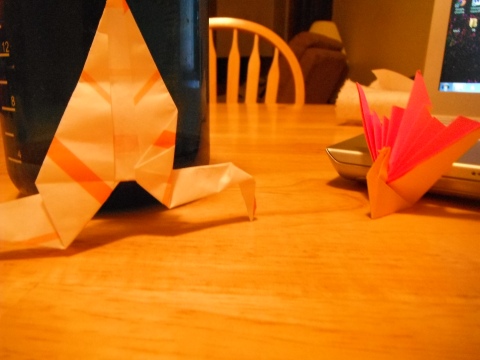