Visiting the Fushimi Inari-taisha was on the top of my must-see list in Kyoto. From the moment I first laid eyes on the famous photos of the thousands of red torii that line the mountain of this shrine I was instantly drawn to the idea of wandering through them. Learning that Inari Okami – the spirit the shrine is dedicated to – is, among other things, considered the spirit of sake only increased my desire to visit the shrine. It didn’t take much time in Japan for me to decide that sake was very deserving of my worship. 😉

Inari is also known as the patron of business and merchants, and among the throngs of tourists and school children at the shrine that day were dozens of businessmen – complete with suits and shiny shoes. 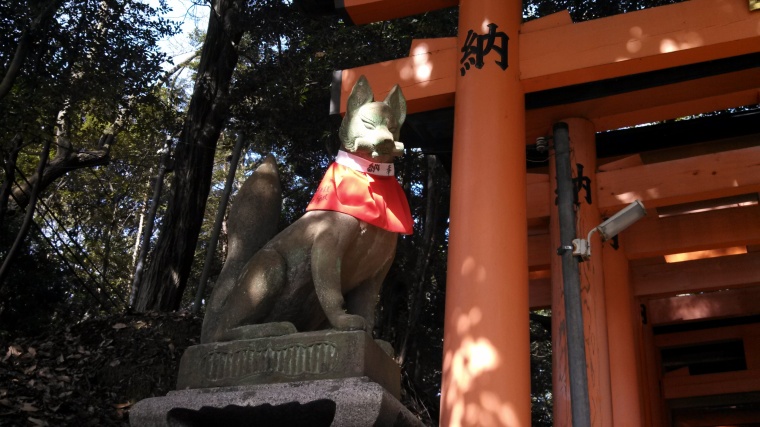 In addition to the famous red gates, statues of foxes abounded in the shrine. In the Shinto tradition, foxes are regarded as messengers. Many of the stone foxes at this shrine held keys in their mouth – supposedly they were the keys to the rice granaries (sake is made out of rice).

After walking beneath a series of large red torii, we arrived at the most photographed and famous area in the shrine. Here the path splits in two and the gates are smaller and placed closely together, creating tunnels through the woods. To my disappointment, the crowd was still thick at this portion of the trail, and it was difficult to get a clear picture. 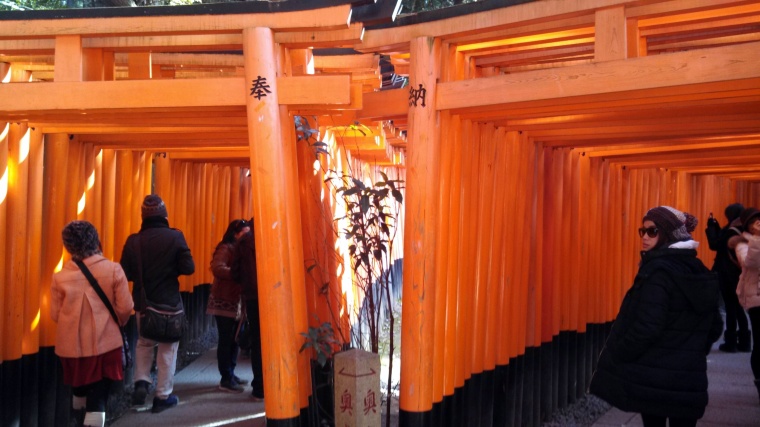 Up to that point, mom and I were unsure as to whether or not we would commit to the entire 4 km mountain walk. There were a lot of things we wanted to see still in Kyoto and we knew the most famous portion of the shrine wasn’t too far along the road. But I was determined to get away from the crowds to try and get in touch with the spirit of the place, so the decision was made to commit to the full loop.

I didn’t know a lot about Shinto culture when I arrived in Japan, but what I had learned by the time we reached the Fushimi Inari shrine appealed to me. I liked the natural setting of all the shrines we visited. I have always felt closest to God in nature. And I liked the inclusive spirit of the religion – no need to convert. Actually, you can practice Shinto in conjunction with other religions if you so desire. Most Japanese consider themselves to be followers of both Buddhism and Shinto. This idea is a long way from the ‘my way or the highway’ theme of Catholicism, the religion in which I was raised.

And so we started climbing up the mountain, my heart full and open and ready to receive the peace I imagined a religion like this might offer. It wasn’t long after that I began to feel monumentally disappointed.

I didn’t mind so much that many of the large torii we passed beneath seemed to be rotting and uncared for. But the electrical lines that shadowed the trail started to bother me. Every so often an ugly rectangular lamp would lean precariously over the path. I couldn’t imagine they’d enhance the vision of this trail, even at low light.

It didn’t take long before we stumbled upon the real reason behind all of those wires. Every kilometer or so along the way, usually perched at a spot that would otherwise open to a beautiful view, was a large teahouse. They were all built the same – so that any view was entirely blocked by the structure. Out front local ladies sold bottles of water and other refreshments, but the chairs and benches were reserved for patrons of a full course meal or sit-down tea.

At this point the trail was still crowded with many people ill-equipped for the steep mountain steps. The only places to sit and rest were these teahouses. I watched in horror as a girl about my age, clearly exhausted, purchased a bottle of water and then leaned over to sit on the steps of the house. The girl hadn’t a chance to actually make contact with the wooden floor before the proprietor shooed her away, yelling in broken English ‘No! Customers only!’ The girl looked at her overpriced bottle of water in confusion, clearly seeing herself as a paying customer. ‘Buy lunch!’ the lady said coldly, and the girl sadly nodded and walked away.

Immediately I was brought back to some of my lower moments while hiking the Camino de Santiago. I despise people who take advantage of religion for profit. Those of you who have been following this blog for a while may remember that it is mostly for this reason I decided to leave Catholicism. Since then I’ve become a bit bitter about organized religion as a whole. I was hopeful that perhaps eastern religions were free of this kind of human selfishness. I felt my heart drop to the pit of my stomach as I watched the scene with the tired girl unfold.

Every time I witness a moment like this, and unfortunately at this point I have now witnessed many such moments, I am brought back to this verse from the Bible:

“And Jesus went into the temple of God, and cast out all them that sold and bought in the temple, and overthrew the tables of the moneychangers, and the seats of them that sold doves, And said unto them, It is written, My house shall be called the house of prayer; but ye have made it a den of thieves.”

Okay, so actually if I’m honest I’m brought back more specifically to this (fast-forward to 1:00 if you’d like to get straight to the point):

What can I say? I’ve always loved showtunes.

Anyway, my point is this: the moment a place of worship turns away a person in need, especially in the name of money, my faith is crushed.

Livid, I started making my way up the steps faster. So maybe my faith wouldn’t be as refreshed as I had hoped at this shrine, I thought to myself, but I bet the view from the top is nice… at the very least.

Up and up and up we went. And after what seemed like a very long time, we finally lost the crowd. The sun was high as we reached the last set of steps, and beams of light streamed in-between the trees and giant gates in a way beautiful enough to give me hope – even if the electrical wires continued to remind me of the ugly truths we had witnessed below.

It’s hard for me to put into words the feeling that overcame me when we reached the top. After everything I’ve written so far, perhaps a picture would demonstrate my experience best:

Yes. At the top of the mountain of this sacred shrine was yet another teahouse – the biggest yet. If you peered through the windows you could make out that the view from the tables inside were lovely. But the effort of the climb alone was not enough to earn the vista to those teahouse managers. As much as I may have even liked a cup of tea at that point, I refused out of principle.

I will admit, I let my anger get the best of me and fumed most of the way down. I wish I had been more in the moment. I’m sure I could have found more good in that place. But I had built up this particular visit so much in my mind, and it just couldn’t live up to my expectations. I kept imagining myself storming into the teahouses Jesus Christ Super Star-style, knocking over tables and singing in a stylish rock-and-roll falsetto. That would have felt good.

It was much less crowded when we returned to the tunnel-like, famous portion of the shrine. And I calmed down enough to enjoy the solitude and snap a few pictures. It almost seemed to me that the shrine was apologizing for the error of its human tenants by allowing us these moments of quiet. I can’t say the peace that I had hoped to encounter on this visit finally overtook me, but I did feel better.

Travel is a funny thing. I have never experienced an environment or culture so different and outside of my comfort zone as I did while in Japan. And yet, as I sat on the train back to the city, I couldn’t help but chuckle a bit to myself. For better or for worse, we humans really all are the same.

One thought on “Fushimi Inari-taisha – We Are All the Same”