After our back-to-back crater climbs on that first day of our Honeymoon, Tom and I retreated to the beach to rest our shaky legs. Taking in the gorgeous scene from the comfort of my lounger, I overheard a couple nearby discussing the North Shore with some friends. They were saying the biggest waves of the year were predicted for the next day. We hadn’t thought much about how to spend our Sunday, but that eavesdropped conversation stuck with me. By dinner time we had decided the next day’s plan – we wanted to see the famous waves ourselves.

The drive across Oahu was easy and scenic, but we were not the only cars on the road. Word of the monster waves had clearly spread, and when we arrived we found the coastal roads moving slowly with bumper to bumper traffic. All along the street were bystanders standing in awe.

The waves were giant. The pictures don’t do them justice. They made my heart beat faster, and standing on the beach as they crashed actually took my breath away.

Yellow caution tape lined the beaches everywhere we went, warning spectators not to cross over onto the sand. We took this warning lightly at our first beach stop. We thought surely the tape was there more to remind us not to swim. The sand seem so safe, the distance to the ocean was still wide. Lots of people were sitting just on the other side of the tape. A few dozen were wandering further down towards the water line. Tom and I didn’t think much of it to cross over the yellow tape like everyone else.

We took some pictures of the waves, felt the spray as they crashed, revelled in the thrill of it… and then the monster came. I saw the ocean pull back further than it had for the others, watched the water peak into a tip higher than before, awed at the perfection of the curl as it formed. I knew it was coming before the crash, and yet still somehow didn’t believe it. I felt my feet start to move backwards. Not with urgency, just anticipation. When the crash did come it felt so immense, so loud, and then the water moved so quickly towards us. The wave came up the entire beach in a violent lick, every inch of sand covered by it’s thirst. Tom and I hit the grass just in time, jumping over the yellow ribbons which – it turned out – delineated the exact spot the water stopped. The exact point of safety. Turning around I was totally amazed the wave didn’t take a person back to the ocean with it. Many shoes and hats and bottles were not so lucky.

A lifeguard got on the loudspeaker. He was unenthused. “That’s what the caution tape is for people,” he said, clearly not for the first time that day, “Please stay behind the yellow caution tape.”

We walked further down the coast to a spot famous for it’s surfing. It was a reef break, far out from shore, but from the road you could still see the surfers clearly. I cursed the poor quality of my cell phone camera as we spent an hour or so watching the impressive agility of these water athletes. I especially loved watching how they entered the water. The waves were too big to swim through when they crashed on shore, so they would have to wait for breaks in the swells long enough to get beyond the crash zone before the next set came in. This only happened maybe 4 times an hour. In the meantime the surfers sat on shore at the ready. 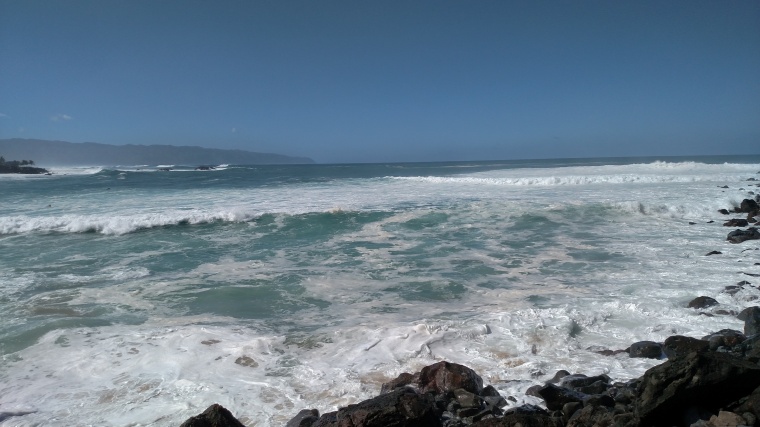 There was one older man – I would guess not entirely in his right mind – who frolicked in the shallow surf. He would stand in the knee deep water doing a dance with a big smile, waving to the crowds as another wave wiped him out. He’d flip around in the water a bit and then emerge again – smiling and dancing until another crash of foaming water took him down again. This scene repeated itself over and over.

And then all at once – a tremendous show of strength and grace. The surfers would run towards the waves altogether just as the water retracted. Their movements looked totally effortless as they ran down the beach, jumped on their boards, and stroked their way up and over the rises of the swells and into the calmer water on the other side. There were men on jetskis who would sometimes come out to assist the surfers to the break from this point. Others paddled themselves there on their own. Memories of my own failed attempts at surfing – of water up my nose and surfboards hitting me in the head as I floundered in waves nowhere near this size – made the spectacle all the more impressive. 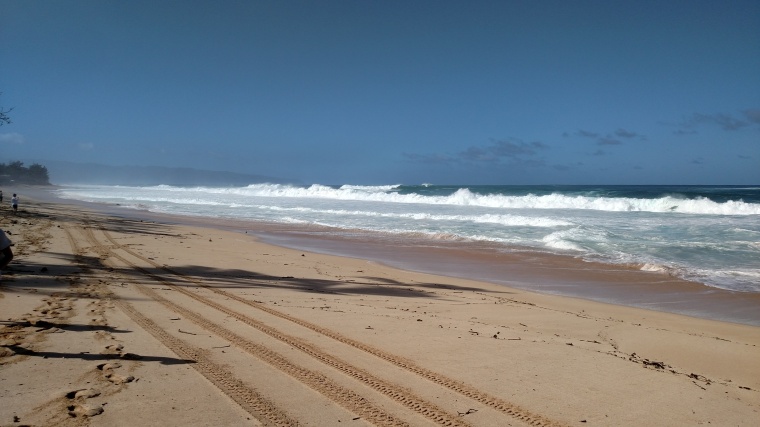 Satisfied to have witnessed North Shore waves in all their glory, there was still one more stop I was keen to make before heading back to our side of the island. Garlic shrimp is a staple in this area of Hawaii, and there were several foodtrucks lining the roads nearby, ready to feed tourists hungry from wave-watching in the sun. It was the perfect way to round out our North Shore day: in crispy, garlicky goodness. 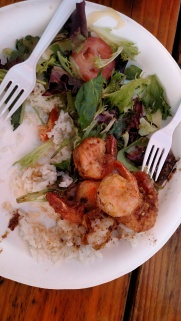