Recently I celebrated my one year Melbourne-versary – that is, the anniversary of my arrival in Melbourne one year ago. I came into this adventure hopeful, but unsure as to how I would cope living so far from home, and how I would do with this giant unknown. Over the last year however, Melbourne has completely won me over with her special southern charms. I’m all settled into life down under these days.

For the first time in my adult life I’m living in an apartment that didn’t come furnished, wasn’t designed for transients, and where I’ve actually had time to decorate the walls. Tom and I have our routines, our regular stops, and our favorite Sunday activities. I have a supportive and growing community of friends to fall back on here. Life is really, really good.

I am no longer a newcomer to Melbourne, but my accent betrays me every time as foreign. While I’ve become comfortable in all other aspects of my life in Australia, there is one question that keeps coming up that I have not figured out how to answer:

Where are you from?

Every time I meet someone new, and sometimes even with familiar acquaintances, the question presents itself. I’m probably faced with it at least once a week. I’ve answered this question so many times now, but it still flusters me.

Where am I from?

I tend to start broad.

I’m American, I say, trying not to wince as I let the words out of my mouth.

That narrows me down. Most people suspect I’m from the North American continent – but am I Canadian or American? Trump or Trudeau?

Most people are polite enough to not ask about politics in that first conversation, but it’s impossible to say the word ‘America’ without a politicized reaction these days. If it doesn’t come up then, it will later. That’s why I wince. I get anxious about what I will tell them when the conversation eventually goes that way.

Often though it doesn’t, not on the first go anyway. Thousands of miles away they may be, but most Australians recognize the many cultures within the American identity. Where in America? They want to know.

This is where I really struggle. I struggle because I want to say a lot of things. 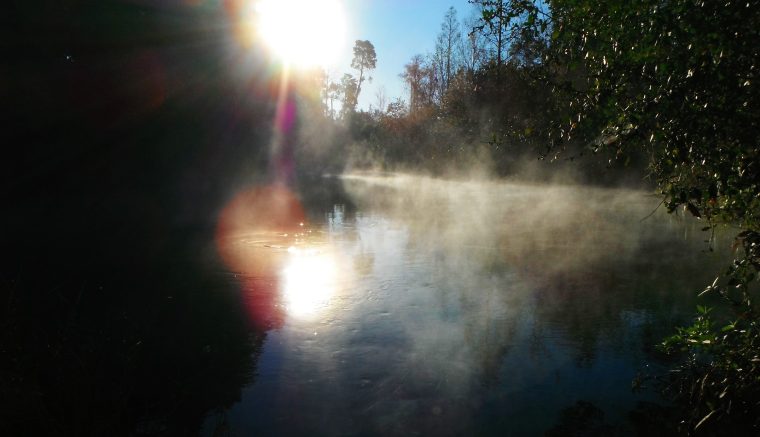 I want to say that I’m from a house full of books and from people who love the sunshine. I’m from 10 years of dance classes with horribly flat feet. I’m from summer thunderstorms and windswept hair, thick with salt after a morning spent in the sea. I’m from clear, calm, deceptively strong-currented rivers, the pristine waters of which I shared with manatees and mermaids more times than I can count. I’m from swelteringly humid days in theme park ride lines, and that magical feeling of fireworks exploding in the sky as the temperature finally cools enough for the sweat to start evaporating from that spot between my shoulder blades. I’m from the dark corners behind the curtains of a handful of theaters; from teachers who gave me the confidence to read and to lead. I’m from music, lots of music.

I’m from four winters in a city of academics and transient learners. Four summers on public transportation and booze, balancing studies with friends and youth and a new kind of independence. I’m from endless hours in cubicals and computer screens, growing more and more restless with each passing second. I’m from a moment – a very specific moment – when I said yes to letting go of a preconceived notion of what ‘adult’ and ‘success’ should be.

I want to say that I’m from canyons – deep, meandering, red canyons that when explored hold so many ancient secrets of life and history and, as it turns out, my own happiness. I’m from mountain peaks and hiking boots and animal encounters that have left me thrilled and terrified and confused and content. I’m from a desert that smells like oatmeal cookies after a rain. Have you ever heard silence before? Real silence? Sometimes this desert sounds like that. I’m from the darkest sky and the brightest, milkiest, way. I’m from fresh powder and corduroy patterns, and from days of selfishly breaking untouched lines.

I’m from 5 weeks straight of walking, and the 6 months of tendonitis that followed. I’m from a flat hat and green and grey, from the thousands I met on the trail and on the road and in visitor centers and museums, from the people who showed kindness and curiosity and the people who did not. I’m from a 16-day furlough that moved me to move on. I’m from rejection, a lot of it.

I’m from one last beautiful summer in the mountains, from the bear that roamed our neighborhood, from the thin rocky road that lead to our driveway. I’m from a community of migrants that enveloped me in their love and inspired me to service. I’m from large margaritas and free chips and dip; and from eager smiles and endless hugs – tiny bodies desperate for my love and attention. I’m from hard choices and big risks. I’m from everything stuffed inside my run-down Osprey pack. I’m from chicken buses and rum and cokes and cold showers and warm evenings. I’m from the friends who became family when we shared all of that.

I want to say I’m from two dark winters and two fast summers in a city that never, ever sleeps. I’m from long hours in crowded classrooms, and long months without my partner, and the crushing, constant, physical sensation that comes with that. I’m from that moment I dressed in blue and walked up a stage in an old cathedral to shake a hand and take a pin.

And now, a year later, it feels a bit like I’m from Melbourne too.

Where are you from, anyway?

5 thoughts on “Where I’m From”